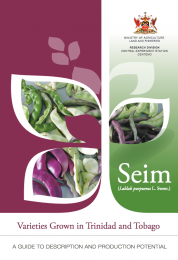 This booklet was written to guide researchers, farmers and consumers on the different varieties of seim grown in Trinidad. This economically important legume crop is underutilized since very little information is available on its growth habit, yield and biochemical characteristics.

In 2006, Kamaldeo Maharaj (Director, Retired) and Susan Mootoo (Agricultural Officer I), initiated a collection exercise of seim varieties grown in Trinidad. Seeds of two (2) accessions were viable and used in this study. In 2007 the Vegetables Unit, Research Division, began a characterization project to collect and evaluate lines found in Trinidad. By 2009, the Vegetables Unit had collected 15 accessions, three of which were duplicates.

This project to study, evaluate and characterize the twelve (12) accessions was completed in 3 years. All of the accessions were established and characterized based on physical characters e.g. flowering pattern, weekly yield data, colour of flower and colour of pods. Additionally, biochemical data was also obtained on sweetness, crude fiber and protein content.

Images showing the plant, flowers and pods as well as graphs of the harvest data of each variety can be used to help farmers in selecting the appropriate variety for production. Breeders and researchers may also use this booklet in the development of new varieties.