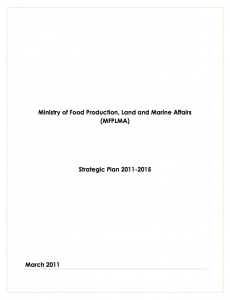 The Ministry of Food Production, acknowledges with deep appreciation the financial and technical assistance provided by the Food and Agriculture Organisation of the United Nations (FAO) in the preparation of its Strategic Plan 2011- 2015. The Ministry is also heartened to note the close collaboration of IICA in this exercise.The completion of the Plan is an initial and essential step in the mission to transform the Ministry into the effective vehicle worthy of leading the challenge of revitalizing agriculture, fisheries and food systems in Trinidad and Tobago.

Clearly, much would depend on the direction and guidance provided in diligently pursuing the initiatives outlined in the document; how quickly and effectively we communicate with our internal (staff) and external (farmers, fishers et al) clients on the details of the Plan; and how aggressively we develop and nurture our strategic partnerships. 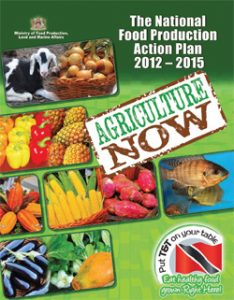 Worldwide there is growing concern and alarm by Governments concerning food security; rising food prices; food price volatility; declining production levels due to climate change; rising demand because of economic and population growth in developing countries; and pressure on food supplies due to the increased demand for biofuels. 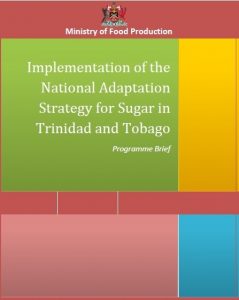 When the Government of Trinidad and Tobago made the decision to divest and restructure the sugar industry, the European Union (EU) stepped in to support the country to address the potential negative impacts of the restructuring, support agricultural and economic diversification, food security and sustainable development. A National Adaptation Strategy was developed and subsequently the EU allocated funding of €75 million over the implementation period 2007 to 2016.

This programme funding is given as Sector Budget Support, meaning that the money is directly transferred to the Consolidated Fund under the Central Bank of Trinidad and Tobago and overseen by the Ministry of Finance (shown below in Figure 1). The implementing agency is the Ministry of Agriculture, Land and Fisheries.

Download the Implementation of the National Adaptation Strategy for Sugar