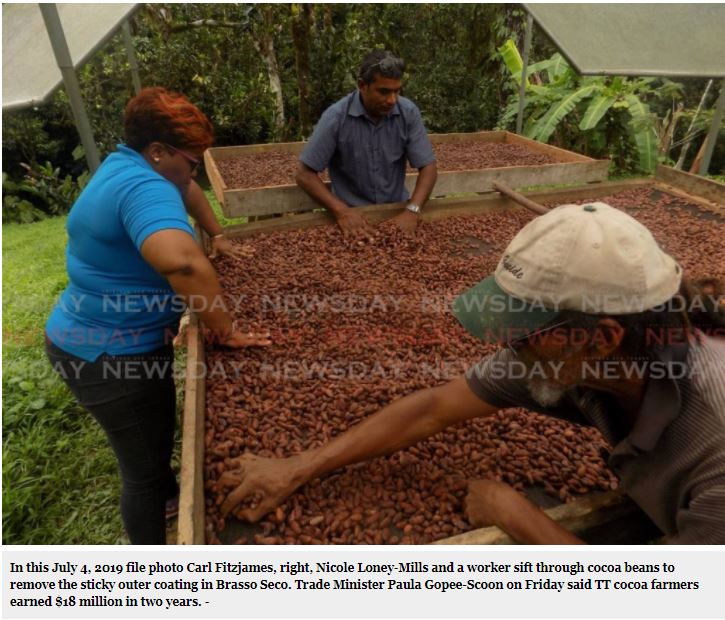 So said Minister of Trade and Industry Paula Gopee-Scoon, during the launch of the second National Cocoa Awards, held virtually on Friday.

In her address, she added that up to August this year, TT cocoa farmers have made about $4.6 million in revenue.

“Our cocoa beans are of premium value and gains significant revenue,” Gopee-Scoon said.

She said TT’s major export markets are in the Netherlands, Germany, Switzerland, Japan and the United States. She added that the top three exporters of local cocoa earns about $500,000 annually.

“This is gratifying as it shows an international palate exists for local cocoa,” Gopee-Scoon said.

Minister of Agriculture Clarence Rambharat, while lauding the farmers’ successes internationally, said funding and technological support will be provided to cocoa farmers to encourage more cultivation and value adding to the popular bean.

But importantly, Rambharat promised to do more for land security for cocoa farmers.

“We have to keep farmers productive and we have to ensure that their land is secure,” Rambharat said.

Cocoa Development TT director Jacqueline Robins boasted that TT cocoa farmers are among the top farmers of the bean in the world having been received eight international cocoa awards – the most collected among any other country in the world.

“This clearly validates our superiority in cocoa,” Robins said.

Last year’s winners, Leroy and Geeta Peters said they were surprised when their names were called as the best producers of cocoa in the country. After their win, they said they got a lot of support from the community, friends and family.

“I come from a cocoa family. My wife as well,” Leroy Peters said. “When we heard we were winners it was out of this world. I always knew we had excellent beans.”