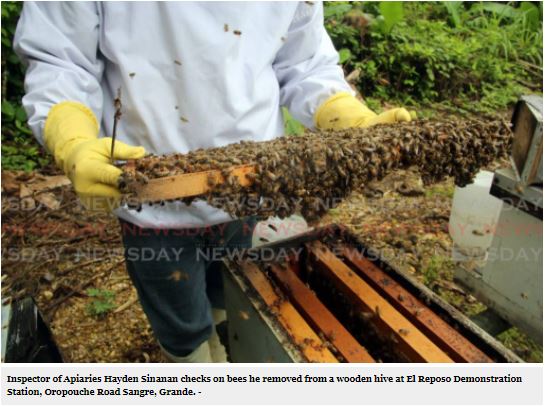 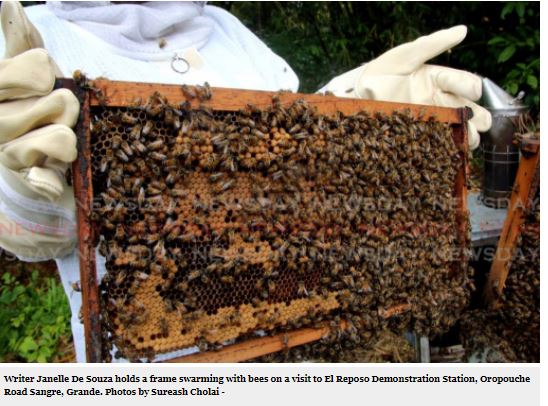 Every year, the Ministry of Agriculture, Land and Fisheries receives reports of someone being stung to death by bees.

“Mostly they are farmers or operators of machinery who are clearing land, but now we are seeing stinging incidents with people who are going fishing or hunting,” says Inspector of Apiaries, Hayden Sinanan.

Despite the danger, Sinanan has always had a fascination with bees. He recalled that his brothers used to keep European honey bees. One day, when he was around age ten, his brothers were moving a hive when it fell. The bees swarmed and many buzzed around him and landed on him, but none stung him.

“I was just curious and went with them to see. I didn’t have on any protective gear as I was just an onlooker. Maybe if they were Africanised bees I wouldn’t be here but that was my first interaction with them and ever since I’ve had a fascination with bees.”

Now, with 26 years of knowledge and practical experience under his belt, he is warning people to stop and backtrack if they encounter bees in their yards, while hiking, or taking part in any outdoor activity.

He explained that, in TT, there is heightened bee activity during the dry season, mainly because of habitat loss. Dry season is the time when state and private developers clear land to build houses and farmers clear land to prepare for planting crops.

On a tour of an apiary at the El Reposo Demonstration Station in Oropouche Road Sangre Grande, he showed how bees thrive in wooden hives, making thick honey-filled combs.

“People are looking at it as a problem with climate change and insects, but, in my opinion, that’s not all. They are coming out now because they don’t have the space they normally have.” 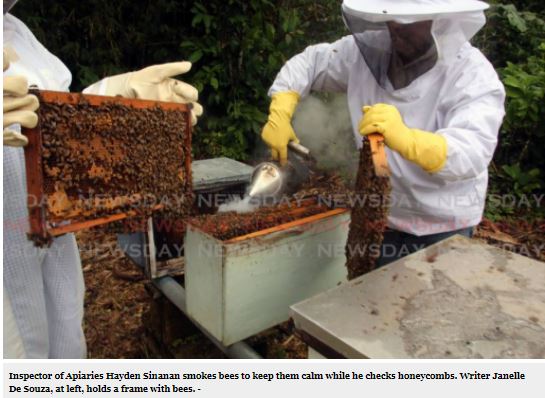 Also, he said, bee colonies develop at a faster rate during the dry season because it is the time forest trees and plants flower.

“So, you find bee colonies that rely heavily on flowers for their food would, of course, develop.”

He believes because of the restrictions, as well as the loss of jobs or reduction in income due to covid19, more people are trying farming, fishing and hunting to support their families or for recreation. People are visiting places they would not usually go and are interacting with bees more often.

Bees can be found in the forested areas as well as forest land which was cleared and there is tree regrowth. They also create nests in small cavities such as tyres, drums, and discarded appliances.

Trinidad has Africanised honey bees while Tobago has European honey bees. Both islands once had the more docile European bees but when the more defensive Africanised bees were introduced to Trinidad, they swarmed more often and out-populated the European and other solitary bees.

He stressed that, while the European bees are less aggressive than the Africanised bees, they are no less dangerous.

“The first thing is to try to keep away from them. So, if you encounter bees, the best thing to do is to move back in the direction from which you came. If there is a hive close by, 15 to 20 feet away or sometimes more, your first encounter would be bees coming and buzzing around you, checking you out, because you are becoming a threat to them.”

He said if bees are buzzing around and a person were to move closer to them, the bees would sting. Once the bees start to sting, the majority of the defending bees from the colony would attack en masse.

He explained, when bees sting a person, they deposit an “alarm pheromone” which encourages other bees do the same. Once they begin to attack, they would cover an area and attack anything that moves.

So, move away from where you see or suspect the hive to be and do not interfere with the hive, especially at this time of year. They are not like Jack Spaniards or wasps or “jeps” where a person can get close to attack a nest.

Also, find a way to cover your face as being stung there is very painful.

“If you see somebody being stung, you could cover yourself, carry a cover for them, and try to get them out. The person will still be stung and you may still be stung, but at least you might save a life.”

Insect repellent will not work. In fact, he said that could make things worse because bees are attracted to strong scents, including strong body odour and perfumes.

If you are stung, seek medical attention because most people do not know how their body will react to the venom. Removing the sting also would not help because the venom has already been deposited. 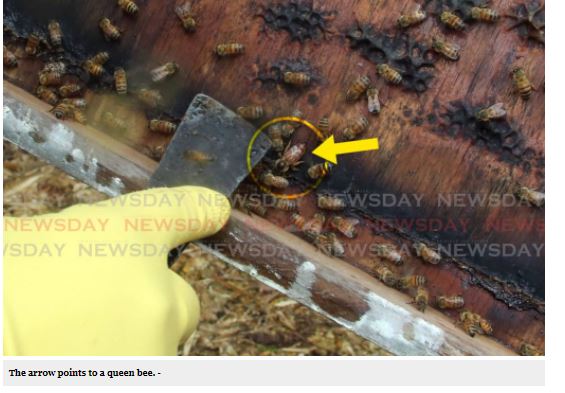 However, if you are far from a medical facility, removing the sting would prevent more venom from being pumped into the body’s system. Do not try to pinch it out as that would squeeze more venom into the body. Instead, try to scrape the sting off using a scraping and lifting motion.

Sinanan advised, if you see bees, contact the nearest Agriculture Ministry office to have the insects removed by one of Trinidad’s 400 active beekeepers, or one of Tobago’s 50 active beekeepers who would usually include the hive in their apiary. If the hive can not be removed, as a last resort, it would be destroyed.

Why a last resort? Because bees are nature’s best pollinators and are very important to the environment.

“They take a flower of agricultural importance, pollinate it, and cause that plant to produce fruits or seeds for human consumption. At strength, a colony would have 20,000 to 60,000 bees in it and at any point in time you could have 80 per cent of them coming out to do pollination on agricultural crops and forest species.

“One third of the food we eat is because of the pollination done by pollinators and, more so, by honey bees. As Einstein said, if bees were to die out, humans would only live for about four years.”

Sinanan is contributing to human survival by being one of the country’s 450 beekeepers. 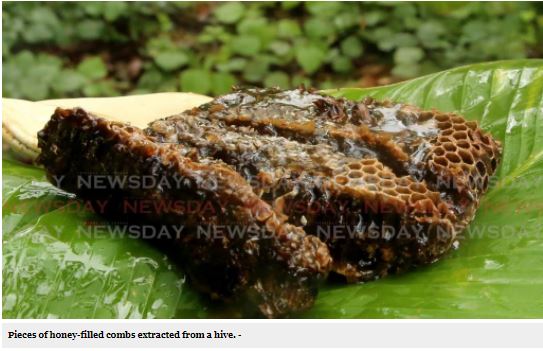 While working in the ministry, he indicated his interest in beekeeping and, in 1994, became a beekeeping officer. At the Eastern Caribbean Institute of Agriculture and Forestry he completed a diploma in agriculture which had one class in beekeeping. This was not enough for Sinanan so he did his own research and sought advice from local, regional, and international beekeepers.

In 2014 he was given the opportunity to become the Inspector of Apiaries, which is not a paid position, but which he happily does in addition to his other duties as an Agricultural Assistant III.

“I am very passionate about it. Really, I always had an interest in beekeeping because I am a person to respect the environment, to do whatever I could to help maintain or develop the environment in terms of flora and fauna.”