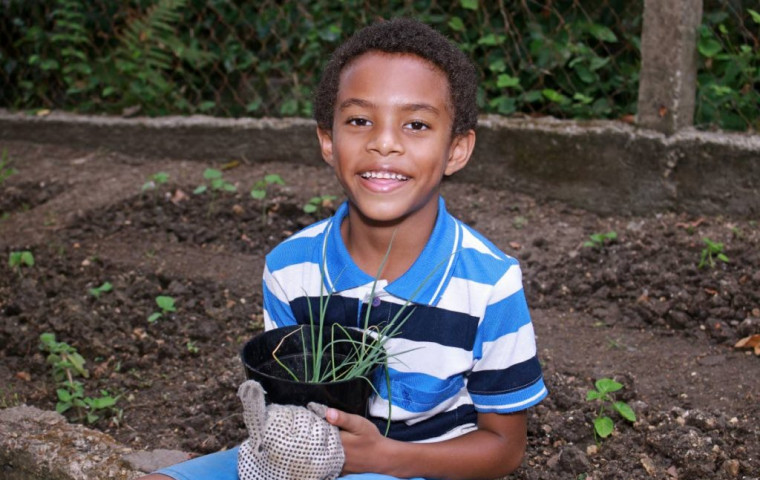 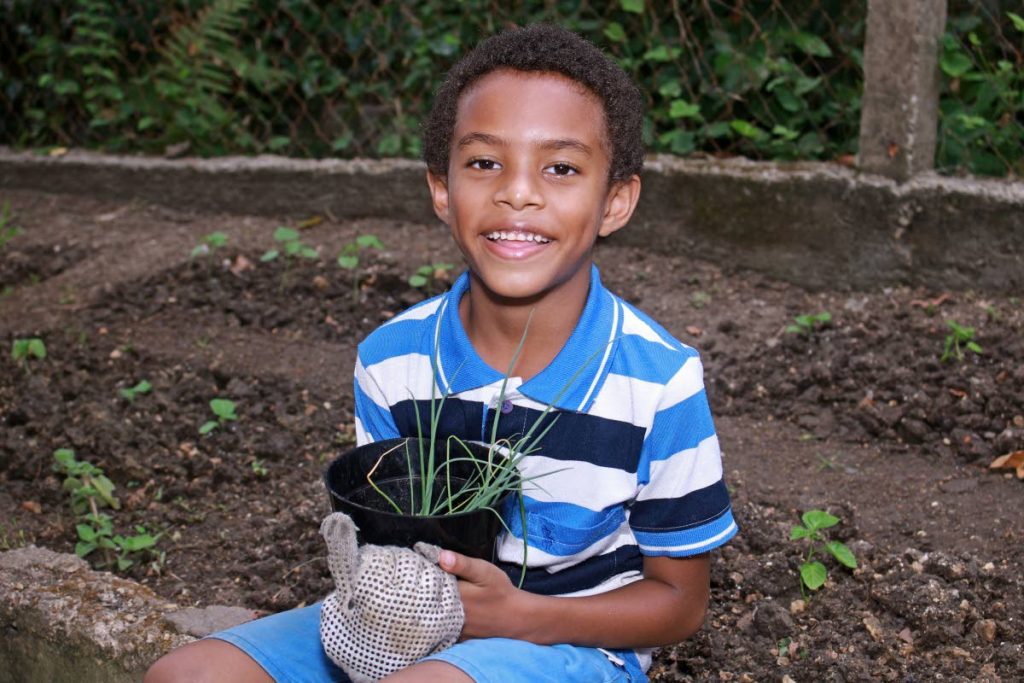 Jevon Augustus holds on to a pot of chive which he proudly planted in his home garden. File photo –

You may have noticed numerous pictures on social media of people’s newly planted gardens or produce from them.

That may be because boredom, a need to fill their time, or necessity have motivated people to start or expand their home, backyard, kitchen, or herb gardens while they are home due to the covid19 restrictions.

“Although they aren’t ready to harvest yet, it’s safer than going to the market or vegetable stalls and being around a crowd of people, I will have easier access to food, and I have something to do with all this free time I have at home.”

She added that, when the crops were ready, she would save money and growing her own food would bring her joy.

Jill Padmore had a similar experience. She said, “I have always planted. I now have the time to plant more. I planted herbs, pineapples, ginger, tumeric, pimentos and bell peppers, watermelon, chive, and tomatoes. And I’m still looking to plant more. The satisfaction you get when you get to consume what you planted is gratifying.”

Esther Pierre said she has had a herb garden for three years. This year, since she had the time, she decided to expand to cherry tomatoes, bell peppers, onions and potatoes. She said some of the seeds were on sale so her purchases, including soil and boxes, amounted to about $500. 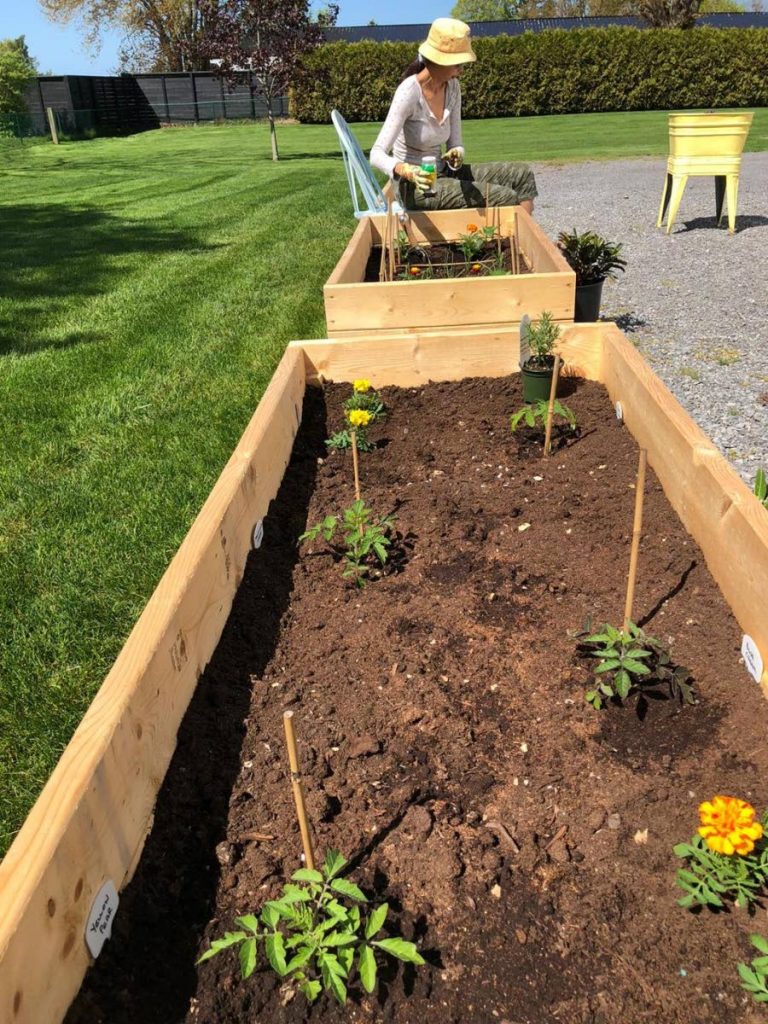 Esther Pierre caring for her vegetable plants, interspersed with marigold flowers, in her back yard. –

“It isn’t saving me any money because nothing has grown yet but when it does I definitely won’t have to buy certain things in the grocery.”

A San Juan woman said she started planting because she had more time on her hands, and plant shops and soil suppliers had specials. She planted cucumber, bodi, tomato, cabbage, cauliflower, lettuce, patchoi, herbs, seasonings, and cannabis.

She said the soil and seeds cost her about $200 and there has been no impact on her grocery bill because they haven’t grown yet.

Another woman said she only planted one item in a flowerpot, so far, because she saw a video on the internet and wanted to try it. She said if it “worked out” she may decide to plant more.

Karen Pierre from Maraval said she had not planted anything new since covid19 landed in TT but she had green fig, sugar apple, sweet potato and beet root planters. 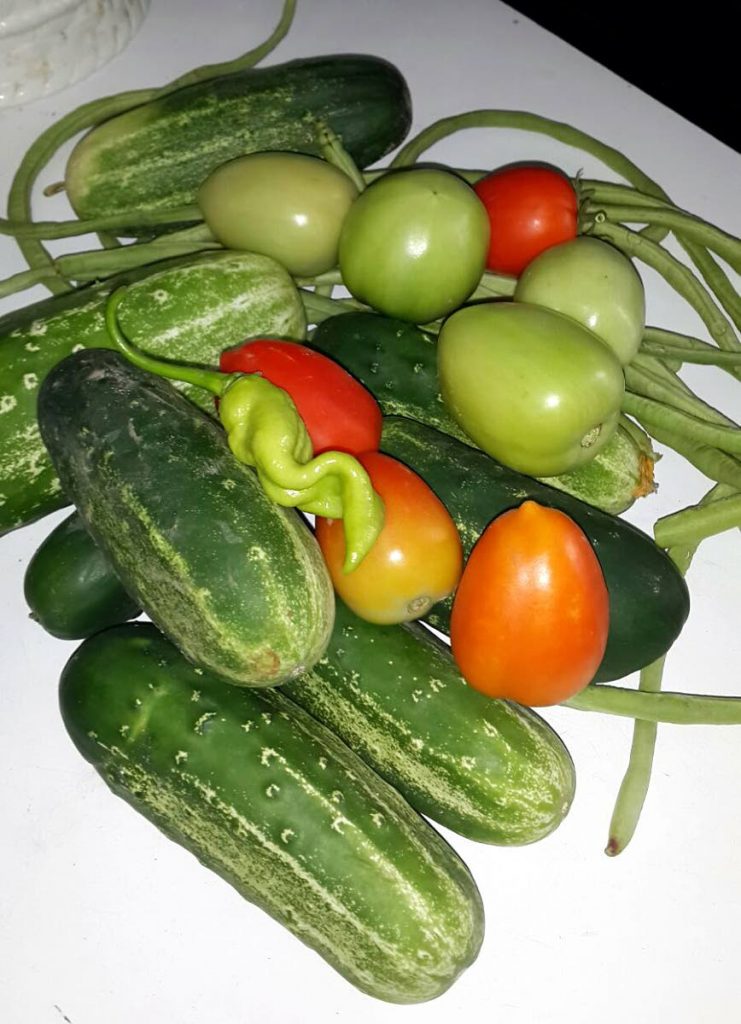 Cucumbers, tomatoes, bodi and pimentoes are among the popular vegetables people are growing at home. –

“I’m glad I had them though because this pandemic highlights the need to take personal responsibility to assist in lowering the country’s food import bill as supply chains will be further impacted moving forward.”

Popular purchases at plant and agriculture shops were consistent with the items people said they were using.

The Aranguez Nurseries Plant Shop and Videsh’s Agri Centre Ltd in San Fernando said people were asking for seeds and seedlings of vegetable crops such as patchoi, cabbage, cauliflower, eggplant, ochro (okra), tomatoes, lettuce, cucumber, celery, parsley, chive and other seasonings. There has also been a steady demand for potting soil and complementary items, such as insecticides, pesticides and fertilisers.

Aranguez Nurseries manager Anne-Marie Rambox said many people were using planters or nursery pots to grow their crops as they did not have much land on which to plant. She said start-up could cost around $100 with a few pots, soil and some seeds or seedlings depending on the number and size of the pots. She said some seedlings would take about four weeks to begin flowering and between four to six weeks to bare depending on the care. The timeframe would be longer for those who started with seeds.

“A lot of people are trying their hands at the seeds. They like to watch it grow and see the progress themselves. They are also into organic farming so we are selling a lot of organic fertilisers even though its more expensive than the chemical-based one.”

She said people were researching the topic at home and were more aware of, and health conscious, about chemicals. She said many cannabis growers were opting for organic fertilisers as well.

Rambox added that the plant shop saw a 90 per cent increase in customers and sales compared to this time last year. 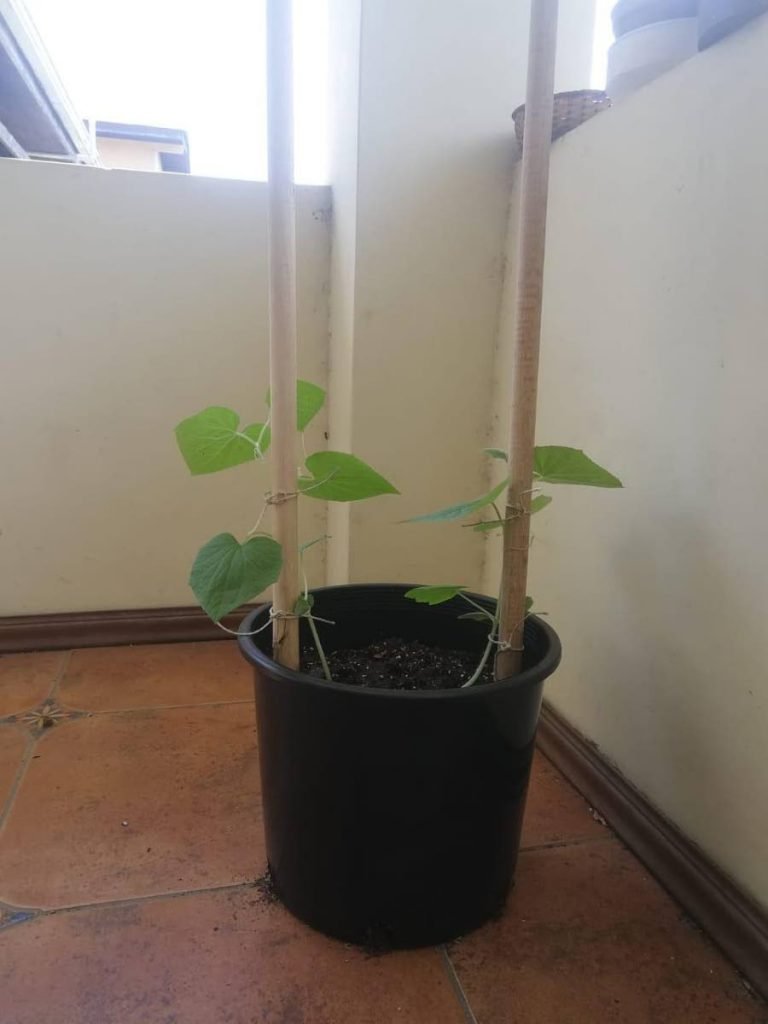 One person used a plant pot to grow her tomato plants. –

Videsh Mana, owner of Videsh’s Agri Centre, said there was also a demand for flowering and ornamental plants as people took on projects to beautify their homes and gardens.

He said he noticed a lot of new customers since the country went “on lockdown” about two months ago but whether they were new to gardening, or new to his shop, his staff would explain the process from planting to reaping and recommended purchases.

He said he usually had a high demand for flowering plants between Valentine’s Day and Mother’s Day so there was no significant increase in the number of sales so far. The fact that he had a lot of wholesale business also contributed to the stability of his numbers.

However, he said the items people bought were different because they were now purchasing vegetable plants.

Director of the Agricultural Services Division, Ministry of Agriculture, Allan Balfour, said his division was seeing similar demand from the public but the ministry did not sell items such as tomatoes, green peppers, lettuce, and patchoi. 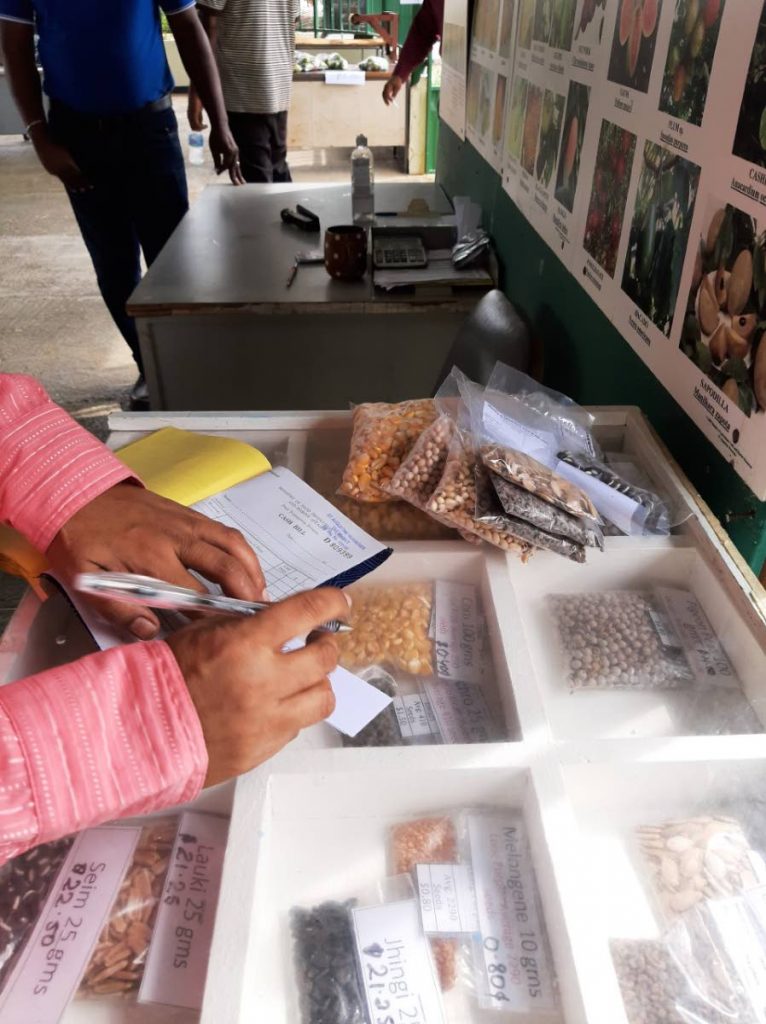 “Those are hybrids. Every time you have to plant them you have to buy a new batch, whereas the ones we have for sale are local open-pollinated varieties. You can take the seeds from that tree and re-plant them. We leave the hybrids for the commercial people. We don’t want to compete with them because our prices are subsidised and therefore cheaper than the open market.”

He said the “big sellers” were fruit trees such as mango, avocado, and citrus. He said most people’s backyards seemed to have room for a dwarf mango tree, or miniature pommecythere that could fit in a big pot.

He said vegetable seeds and seedlings such as eggplant, bodi, hot peppers, corn, pigeon peas, pumpkin, and caraili were also popular. He added that, because of the demand for vegetable seedlings, the division would make them available on a more consistent basis from June but with limited distribution.

“Because of the increase in demand we have to restrict the number of certain big sellers to each customer so that our supply can stretch a bit.”

Balfour explained that the division sold seeds from the National Seed Bank in Chaguaramas at the St Augustine Nursery and La Reunion Plant Propagation Station in Centeno. They also sell original and grafted fruit trees, as well as vegetable and ornamental plants.

He said, usually, their biggest sale period was the second week of June, around Corpus Christi, and it remained so even with this year’s spike in sales due to covid19 and the first distribution of seeds at the launch of the national seed initiative, Grow Trinbago, in Arima on May 9.

The initiative meant the distribution of over 50,000 seeds through MPs and local government representatives to households in various communities to encourage people to get more involved in home-gardening.

“That in itself brought a lot of attention to the fact that we have seeds. So even though people were getting them for free through the initiative, there were those who came to purchase seeds.”

With so many new gardeners in TT, Balfour gave some tips.

He suggested that people alternate the harvest stages by staggering their planting. In this way they would not have a glut of produce that they could not use and therefore lead to wastage.

Intercropping, he said, was another good idea. He suggested that people plant multiple crops in the same space so at harvest time, people would get a little of everything to satisfy their dietary needs instead of large amounts of a few items. He said this also helped limit the movement of pests and diseases between crops.

He added that some people plant marigold and chrysanthemum flower beds between crops as they had pesticidal properties.