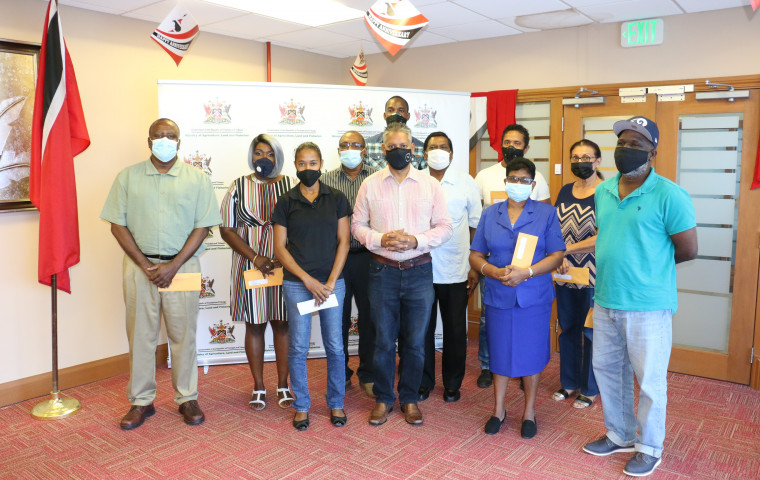 December 22, 2020:- Sacrifice is germane to the success of one’s investment in agriculture. Such was the sentiment of the Minister of Agriculture, Land and Fisheries, Senator the Honourable Clarence Rambharat on Tuesday 22nd December, 2020, as he addressed recipients at a Lease Letter Distribution Ceremony which took place at his Ministry’s corporate headquarters in Chaguanas. At the event, ten (10) farmers received letters which conveyed Cabinet’s approval to grant them, standard agricultural leases for an initial period of thirty (30) years.

In delivering the Feature Address at the ceremony, Minister Rambharat likened the costs for the survey of agricultural State lands – which the lease applicant (and not the State) now incurs – to that of a nominal sacrifice, particularly when one considers the current valuation and survey investments made by those seeking to acquire the use of residential and commercial properties. In the same vein, he added that each applicant had both a moral and financial responsibility, to meet the survey costs associated with the execution of their agricultural leases as these were already, highly subsidized by the taxpayer, on behalf of the farming community.

The lease letters distributed earlier today, will empower farmers to engage directly with financial entities and State agencies in the conduct of legitimate business with respect to their agricultural parcels.