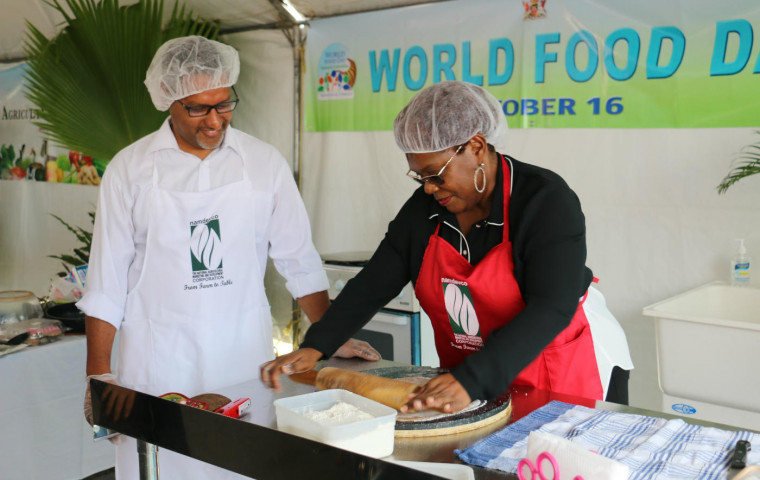 “World Food Day is every day and I want you to continue to support the beautiful and brilliant work that our food producers in this country are doing” was the message of the Agriculture Minister in his Feature Address at the World Food Day event hosted by the Ministry in collaboration with the National Agricultural Marketing and Development Corporation (NAMDEVCO) and the World Food Day National Committee of Trinidad and Tobago (WFDNCTT) on Saturday 14th October, 2017.

Senator the Honourable Clarence Rambharat, Minister of Agriculture, Land and Fisheries as he delivered the Feature Address also expressed the view that some do not attach enough importance to the impact of the environment on food production particularly as it relates to climate change. Emphasizing his point, Minister Rambharat noted “what farmers have told me in relation to the production of tomatoes for example is that the combination of intense rain and intense heat interferes with the integrity of the plant itself. For this reason, we need to pay very close attention to what is happening on the field because farmers are dealing with new things which no doubt necessitate the advice and support from the Ministry’s technical staff so we need to create opportunities for farmers to interact with staff on a real-time basis with regards to addressing some these issues.”

The event – which took place on the compound of the Ministry’s corporate headquarters in Chaguanas – also saw the delivery of messages by the Chaguanas Mayor, His Worship Alderman Gopaul Boodan; Food and Agriculture (FAO) Representative Ad Interim for Trinidad and Tobago and Suriname, Dr. Terri Raney; and Ms. Deokee Bholasingh-Hay, Chair of the WFDNCTT.

The activities included a NAMDEVCO-hosted Farmers Market; a host of displays/exhibits from various stakeholder Agencies; competitions; cooking demonstrations and sampling as well as giveaways all in keeping with the World Food Day theme: ‘Change the future of migration. Invest in food security and rural development.’

Permanent Secretary, Ministry of Agriculture, Land and Fisheries, Mrs. Angela Siew joined the Minister in an exciting display of cooking skills with live ‘all local’ cooking demonstrations of whole wheat sada; bhagi, pumpkin, plantain wontons served with ice cream made with goat’s milk, taro au gratin, and cassava crouquets. These demonstrations were facilitated by chefs from Callelujah Limited, Nutrimix Group of Companies and NAMDEVCO. All the vegetables used for the demonstrations and sampling were purchased at the NAMDEVCO Farmer’s Market; while Massy Stores provided vouchers for the purchase of dry ingredients.

The Minister reminded all present about the expansion works soon to be completed and undertaken at both the Debe Wholesale Market and the Norris Deonarine Northern Wholesale Market respectively, by early next year – which he said “would help alleviate the congestion” and bring some ease to the vendors, consumers as well as the communities in which these facilities interact. On this note, he was pleased to announce the Ministry’s plans to institute a ‘permanent establishment’ for the NAMDEVCO’s Farmers’ Market, currently hosted every Saturday, on the compound of the Ministry’s Head Office. Minister Rambharat said of the location “on this facility we will continue to maintain a Farmers’ Market and in fact we have plans, as we speak, of putting a more permanent establishment on the Eastern end of this building.”

Representing the Ministry’s exhibitor booths at the event were representatives from its Research; Agricultural Services; and Extension, Training and Information Services (ETIS) Divisions. Their efforts were complemented by NAMDEVCO; WFDNCTT; FAO; 4H Students; Cocoa Development Company of Trinidad and Tobago Limited (CDCTTL); Inter-American Institute for Cooperation on Agriculture (IICA); Network of Rural Women Producers; Trinidad and Tobago Goat and Sheep Society; and the Nutrimix Group of Companies.