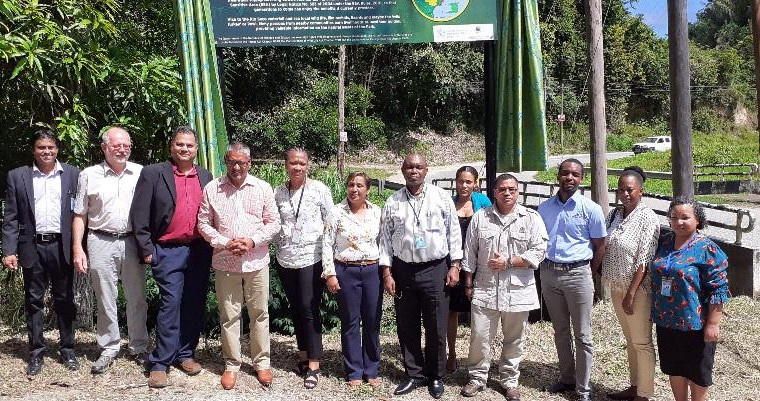 13th November 2019. An official launch for the unveiling of new signage took place today at the Matura National Park in Matura. The event an initiative of the Food and Agriculture Organization of the United Nations (FAO/UN) in collaboration with the Ministry of Agriculture, Land and Fisheries and the Environmental Management Authority (EMA).

In his remarks at the event, Senator the Honourable Clarence Rambharat, Minister of Agriculture, Land and Fisheries (MALF) said that this initiative was very important for the area and he thanked the FAO for their support, as they worked closely with the Ministry to realize the project.
The signage is intended to build public awareness of local forest and protected areas. These are critical communication components of the project, which is “Improving Forest and Protected Area Management in Trinidad and Tobago” says the FAO. The project is an ongoing initiative which has been implemented by the Organisation on the Government’s behalf over the last four years.

The main sign which was unveiled at today’s event will provide information on the size of the protected area, its assets and share instructive messages on the use of the site to support proper management of the area. It is located at the corner of Toco Road and Salybia-Matura Trace, Salybia Village which is an entryway into the Matura National Park Environmentally Sensitive Area (ESA).
In addition, other signs will be located at the ESA’s boundary and in the surrounding communities from Matura to Matelot.
Officials from the Food and Agriculture also indicated that the project is expected to be expanded to four other protected areas across Trinidad and Tobago in the coming months and will conclude in May 2020.

Agriculture Minister, Clarence Rambharat with representatives from the FAO, EMA, IMA and the Forestry Division at the Signage Unveiling Ceremony in Matura