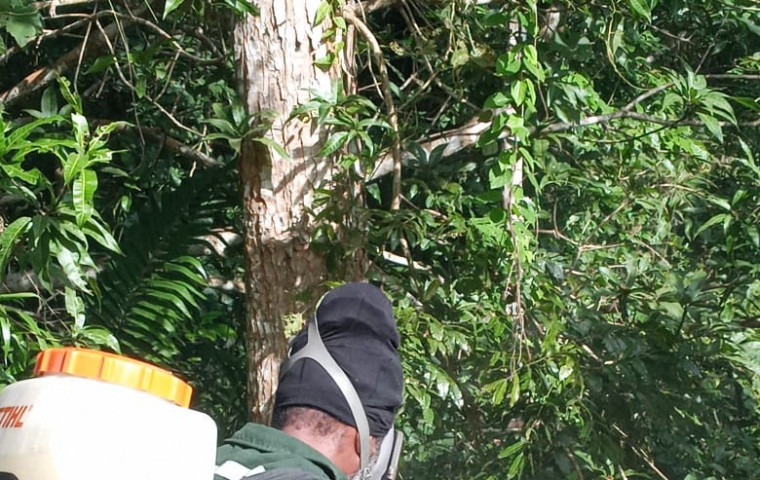 March 24, 2021:- The Locust Management regimen in the St. Patrick West County is currently ongoing with several exercises being conducted by the Regional Administration South (RAS) Division of the Ministry of Agriculture, Land and Fisheries, at different locations in recent times.

Previously, the area was affected by both the Cedros and Moruga Locusts, however for 2021, only Moruga Locust activity has been observed. The major areas affected by a heavy to medium emergence of hoppers include: Granville Road, Bowen Trace, Chatham and environs. Over the last ten (10) years, there has been a high level of locust activity at the sites aforementioned due to heavy deforestation and other human activity which have led to pest incursions in both agricultural and more recently, residential communities in the area.

Education and sensitisation of citizens is a year round exercise undertaken by the Extension Officers attached to the St. Patrick West County, using various methods including social media, community meetings, demonstrations / workshops and advisory visits.

Surveillance for locust activity takes place throughout the year and involves the following:

Surveillance was conducted in Santa Flora, Palo Seco, Erin, Sand Pit Road, Fyzabad and Coromandel. These are areas where prior activity had been observed in years gone by, however, no such activity has been observed thus far.

In excess of one hundred and forty four (144) hectares have been surveyed for 2021 to date. This figure is cumulative and includes repeated surveillance activities.

Spraying activities are conducted using both mist blowers as well the cannon sprayer using either Propoxur or Ethrine Plus (active ingredients). Only forested areas or areas close to farmers’ holdings are sprayed. Households are not sprayed as the locusts generally move within a day or two and there is no direct threat to humans from the locusts themselves. Spraying of households can trigger major concerns for the overall health of animals and livestock. Additionally, it also creates deleterious effects of potable water in rural areas.

Forested areas are sprayed with the Propoxur mainly using the Cannon sprayer and areas close to farmers’ holdings that are threatened by possible locust infestations are sprayed with the Ethrine Plus. Thus far, in excess of sixty six (66) hectares have been treated and this figure also includes repeated treatments in infested areas. As a result of the surveillance and spraying activities, the Agriculture Ministry has been able to keep crop damage by the Moruga Locusts, to almost negligible.

To date, only juvenile Moruga Locusts have been sighted with a mix of nymphal stages presently ranging from first instar to third instar. From the Ministry’s observations of their development, the Moruga Locusts are expected to take flight in swarms from mid to late April as they traditionally do. 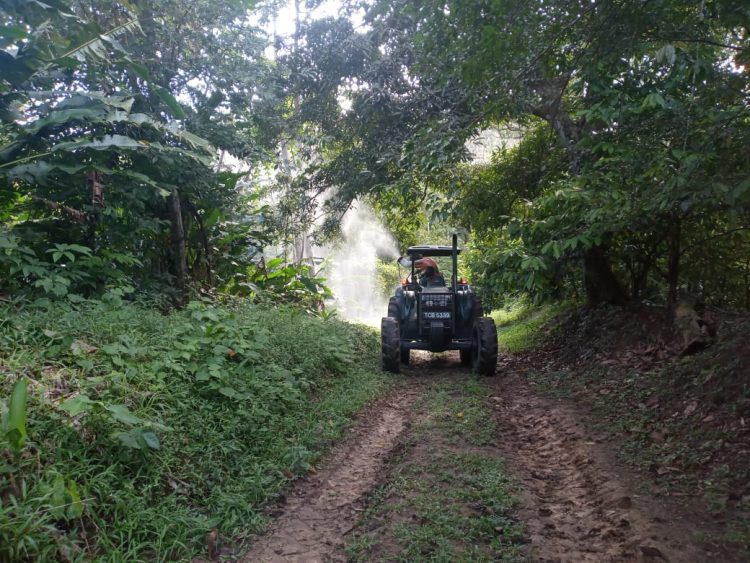 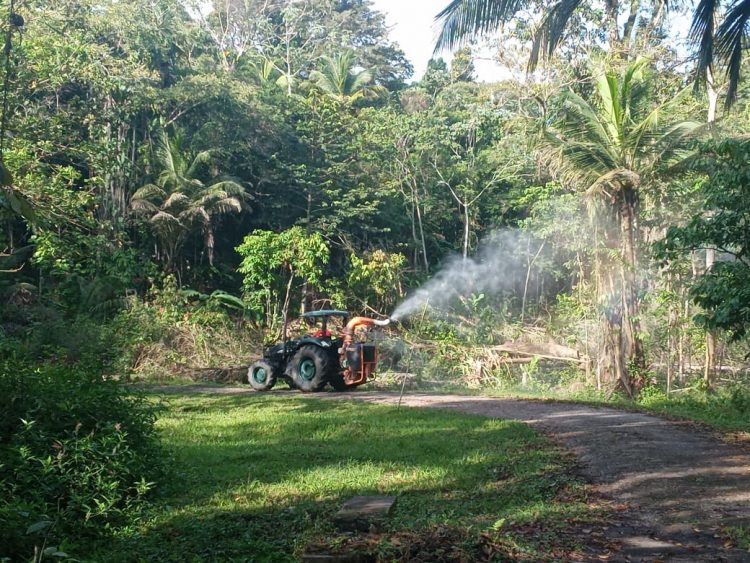 Staff of the Regional Administration South (RAS) Division of the Ministry of Agriculture, Land and Fisheries, target hoppers with a cannon sprayer at Granville Old Road in Cedros, earlier this week, during one of its ongoing locust management exercises in the area. The Granville Old Road area – as well as Bowen Trace, Chatham and environs – was identified by RAS to be one of the major areas affected by a heavy to medium emergence of locust hoppers. Spraying is done in a targeted manner and follows a careful and systematic process of locust reconnaissance (i.e. observing locust activity overtime) to ensure that harmful chemical agents are not released into the environment unnecessarily.