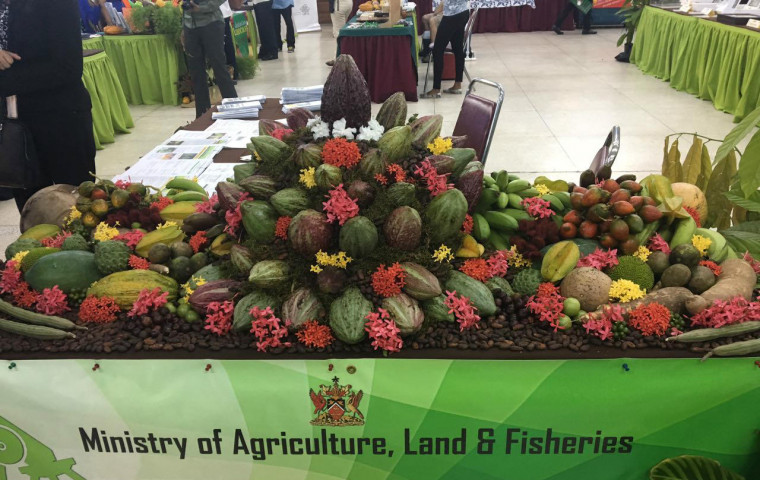 We must be prepared to defend our fine flavor cocoa producing status’ said Agriculture Minister, Senator the Honourable Clarence Rambharat at the Opening Ceremony of the two-day exhibition, in celebration of World Cocoa and Chocolate Day, hosted by the Cocoa Research Centre of the University of the West Indies, St Augustine Campus on Friday 6th October, 2017.

‘Next year’ the Minister shared ‘the fine flavor status that we enjoy is going to be evaluated; and requires a lot of preparation and focus if we are to preserve our status as a fine cocoa exporter’. ‘The most important investment that we are going to make in relation to cocoa, in the next six months, is to make sure that when we face that panel [we can] present [our case] in defense of the status of Trinidad and Tobago’. This status is currently enjoyed through the ‘dint of hard work and love of the farmers and [key stakeholder such as] CRC and Cocoa Development Company’.

Minister Rambharat said that he was ‘very happy to see cocoa farmers and value added producers and processors among the audience’; and publicly commended Mr. Duane Dove of Tobago Cocoa Estates Limited for his recent awards received – ‘Laura’ milk bar, made from the finest trinitario beans, won gold in the semifinal round of the International Chocolate Awards. Also, the Rio Claro Demonstration Station and the San Juan Estate in Gran Couva were adjudged to be among the 50 best bean samples in the world at the 2017Salon du Chocolat.

Holding up as a model for success in agricultural activity, he spoke of his visit to the Montserrat Cocoa Farmers’ Cooperative Society Limited; sharing that they ‘work with a plan, they are well organized, they are well resourced, they have audited accounts’. He reminded the audience that the Cooperative has also received the Rainforest Alliance Certification – ‘a well-recognized mark internationally in relation to their sustainable agricultural practices’. He applauded them all, saying that they have used the ‘resources that we have to produce something world class’.

The Agriculture Minister however lamented that we need to ‘invest in the protection of our beautiful products – including cocoa and hot peppers – both the germplasm and the name’.

Adding support to the work of the Ministry of Agriculture, Senator the Honourable Paula Gopee-Scoon, Minister of Trade and Industry told the audience of industry stakeholders that ‘we must commercialize this product and [complete] the value added process here’; stating further that she was pleased to add her ‘support to this celebration of World Cocoa and Chocolate Day’.

‘We lead the world in cocoa research’ was the boast of the University of the West Indies, St Augustine Campus Principal, Professor Brian Copeland, while outlining the value of the cocoa gene bank managed by the University’s Cocoa Research Centre. He referenced the recent ravages of the Region by devastating hurricanes, noting that it may be possible to craft more climate resilient cocoa varieties for the region.

‘Modernizing the sector from the bottom up by empowering you the stakeholders’ was the theme of the address delivered by Professor Pathmanathan Umaharan, Director, Cocoa Research Centre, UWI, St Augustine. He shared that providing support to stakeholders in a holistic way is the mandate behind the operationalization of the International Fine Cocoa Innovation Centre (IFCIC); highlighting a number of other projects aimed at providing support ‘for the betterment of cocoa’.

‘We are giving equal significance to cocoa [and] we need to strengthen the connections among the stakeholders in the industry’ said Mr. Winston Rudder, Chairman of the Cocoa Development Company of Trinidad and Tobago Limited (CDCTTL).

Among the exhibitors were value added producers, including Cocobel; Omarbeans; Exotic Mountain Pride; Tamana Mountain Chocolates; Alliance of Rural Communities; Phillipa’s Garden; and other organisations and Agencies such as the Cocoa Research Unit of the Ministry of Agriculture, Land and Fisheries; Cocoa Development Company of Trinidad and Tobago; and NIHERST.