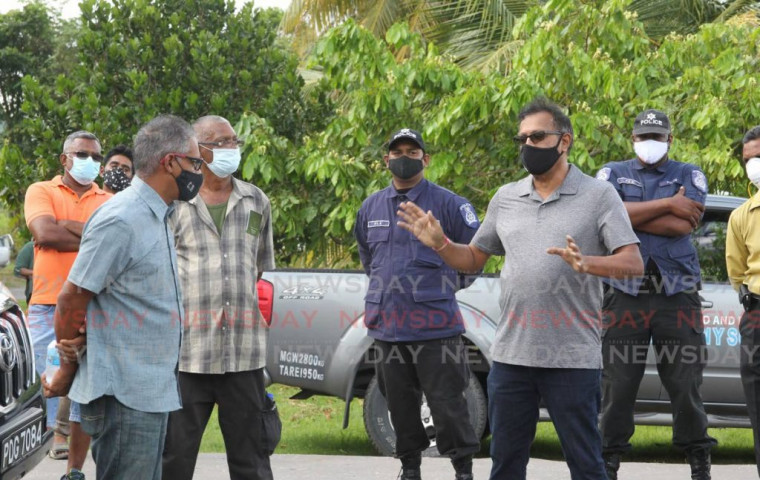 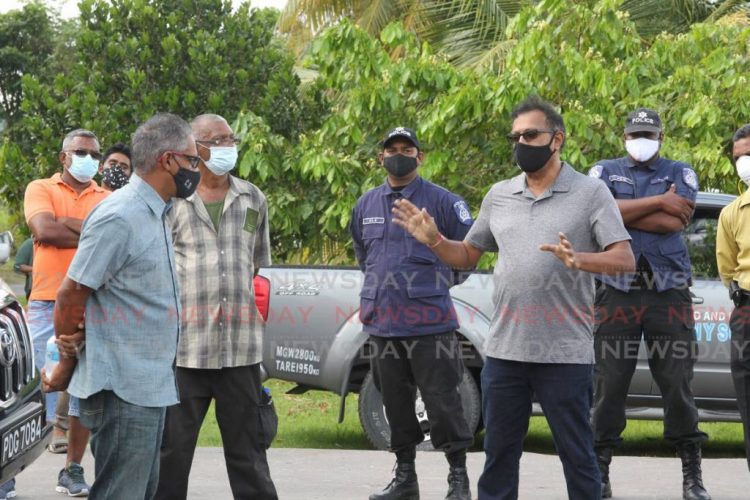 He intends to raise the matter with the Prime Minister.

He told a group of Plum Mitan farmers on Wednesday that the Ministry of Works and Transport and WASA’s water-resource management were better suited to deal with these issues.

Rambharat, accompanied by Commissioner of State Lands Bhanmatie Seecharan, the director of the Agriculture Ministry’s engineering division Ann Marie Dardaine, and several other ministry officials, including Kelly Doodnath the agricultural officer assigned to the lagoon, visited the farmers in the Plum Mitan lagoon to hear and see first-hand some of their complaints.

After the tour, Rambharat said he needed to reconvene a meeting of the heads of department to develop a priority plan to rescue the Plum Mitan farmers.

Last week, Sunday Newsday highlighted the plight of the farmers, who complained that the pumps needed to prevent their fields from being flooded were inoperable and the water channels were clogged with silt.

They extended an open invitation to Rambharat and his team, and the minister said he had no problem in meeting with them. On Wednesday, he accepted the invitation and took time to listen to all their concerns, offer solutions, and tour the lagoon with a select group of farmers.

The farmers, who gathered at the government quarters in the lagoon to await the minister’s arrival, were shown a video package made by Floyd Homer and Terry Sampson, which was done to raise awareness of their issues, and which caught the attention of the minister recently.

In response, farmers said they were hoping the minister makes good on his promises and gets the necessary funding to help them provide more food to the nation.

Rambharat said he was committed to the development programme to improve the infrastructure to aid the farmers, was finalising the budget for the 2020/2021 fiscal package and was optimistic that the promise of $500 million for capital expenses would be a reality.

He said the ministry was constrained by the lack of adequate funding to get projects off the ground, but noted that the Prime Minister had made agriculture a priority area in the second term and Plum Mitan was special because of the amount of food the farmers produced and the fact that many people in this rural district did not have any alternative source of income.

He said after speaking to farmers he understood the main issues were water management, regularising land tenure, and the availability of specialised training for farmers to develop new skills and use technology in growing crops and reducing labour.

Rambharat said the engineering division had already identified the problems with the non-functioning pumps and was disheartened to learn that farmers had to dip into their own pockets to buy diesel to keep them running.

“We can’t let something like that affect the farmers in Plum Mitan,” he said, adding that had someone approached him, he would have taken money from his election campaign in the Chaguanas East constituency to buy fuel.

Rambharat said there was a lot of money in agriculture: $250 million passes through the farmers’ market at Namdevco and there were more opportunities if farmers accessed the grants of up to $100,000 each to improve the infrastructure on their farms, which includes packing houses, security, solar lights, mechanised farming equipment and washroom facilities.

He acknowledged that the issue of water management was a sensitive one, as the farms bordered the protected Nariva Swamp, which was damaged in the October 2018 floods.

Addressing complaints about the length of time to get leases approved, the minister said it usually took 20 years for a file to leave an agricultural station to get to the minister’s desk, but noted that “things are moving a little faster now on the renewals.”

He said he had done considerable work to unclog the backlog of lease renewals in his last stint as minister in the Rowley administration and suggested that may have been a reason he was reappointed for another term.

Rambharat pleaded with the farmers to write formal letters seeking updates on their pending applications, as that provided him with a paper trail and was easy to track.

Doodnath told the farmers that he had to literally beg the Ministry of Works to help desilt some of the clogged water channels and pleaded for a “long-reach” excavator to be stationed at the lagoon full-time to maintain the watercourses in the 1,200 acres.

Dardaine said her division intended to buy an excavator for the site to service the 40 kilometres of canals.

On the issue of pending claims for compensation after acres of crops were destroyed by floods, Rambharat conceded that the process was not a simple one, as it had to be verified and supported by evidence. He said if such claims were made by farmers groups rather than individuals, they would be easier to address.

“Some people feel because you make a claim you will get money. Some people cannot support their claim. They don’t have permission to be on the land,” he said.

But he agreed that if a claim does not meet the requirement, the applicant must be informed, which was not the case.

Dealing with a complaint from a farmer about the operations at the Port of Spain Market, the minister said “the corruption is with the police,” and he had raised the issue with both Port of Spain mayor Joel Martinez and deputy mayor Hillan Morean.

He said officers demand payment from the farmers to open the gate to the market, and they determine when the market should be closed for sanitisation.

“That is an ongoing battle,” he said.

On the suggestion of subsidising the cost of chemicals, Rambharat said the government cannot incentivise farming any more. He said some products were tax-free, duty-free and the government was not willing to reach the point of distributing fertiliser free.

He said compensation for flood loss of crops had become a business, with people planting crops to earn the highest return on flood damage – or fake flood damage. The bulk of incentives, he complained, are used by farmers to buy vehicles which never see a farm, and he pleaded with them to boost their production using the incentives already offered by the government.