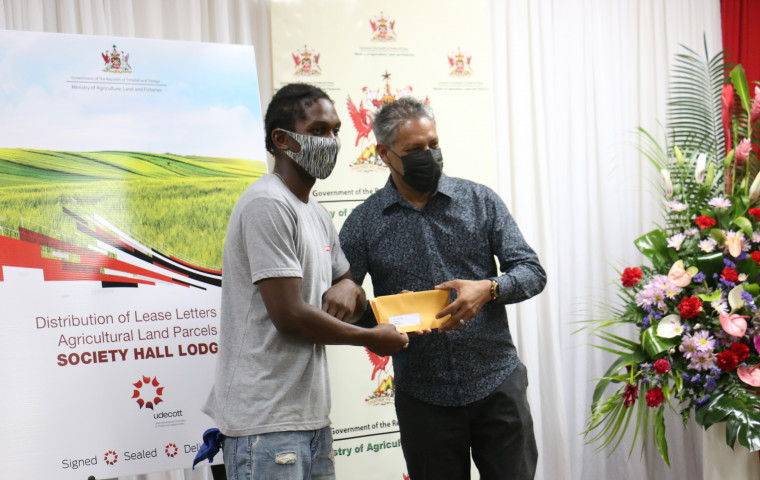 Seventeen (17) farmers from Marabella, received lease letters for two (2)-acre agricultural parcels as part of the Government’s plan to develop an initial, forty (40)-acre agricultural park in the St. Madeleine area. The letters, which conveyed Cabinet’s approval to grant recipients a standard agricultural lease for an initial period of thirty (30) years, were distributed by Senator the Honourable Clarence Rambharat, Minister of Agriculture, Land and Fisheries on Wednesday 31st March, 2021, at the Society Hall Lodge in Marabella. Assisting Minister Rambharat with the distribution at the event were the Attorney General, Minister of Legal Affairs and Member of Parliament for San Fernando West, the Honourable Faris Al Rawi and Councillor for Marabella West, Mr. Michael Johnson.

According to Minister Rambharat, the allocated lands are in close proximity to the Usine St. Madeleine Factory and will auger well for site expansion as it was the Government’s intention to accommodate more farmers in the area. On this point he identified with two (2) young farmers – in addition to the seventeen (17) – who would have received their agricultural lease letters prior to Wednesday’s distribution exercise. The Minister said: “The idea is not just to place you on the land but to develop that site overtime. Initially, it is a 40-acre site which will be developed into an agri-park, not an amusement park nor a fenced partition but an area where sustainable agriculture can be harnessed with site development support from the State.” He reminded the lease letter recipients that the agricultural parcel was “a significant piece of asset” they were “acquiring” at the expense of the State to be able to attain “a sustainable income stream” and an added sense of security for their investment.

In his address to recipients, the Minister empathised with those who sought land tenure for agricultural parcels and had been waiting for the State to advertise the availability of same as per established procedure. This he said has been stymied because he has had to treat with State land matters dated as far as thirty (30) years on average and also because existing agricultural parcels owned by the State, were either not cultivated or under-cultivated. On this latter note, Minister Rambharat identified with a recent survey of the two (2)-acre Caroni (1975) VSEP agricultural parcels which revealed that only fifteen (15) percent of these were in actual production. He added that steps have since been taken for both the Commissioner of State Lands and the Estate Management and Business Development Company Limited (EMBD), to serve these land owners notice to cultivate as required, failing which the lands will be reclaimed and put into use by those farmers serious about production.

Additionally, on the issue of the disbursement of residential parcels for Caroni VSEP workers, Minister Rambharat revealed that of the 7,400 former employees so entitled, just about 4,400 of them received their residential leases to date. The others, he explained may not have received their leases because the remaining sites are either the subject of court matters or there are statutory approvals that remain outstanding. 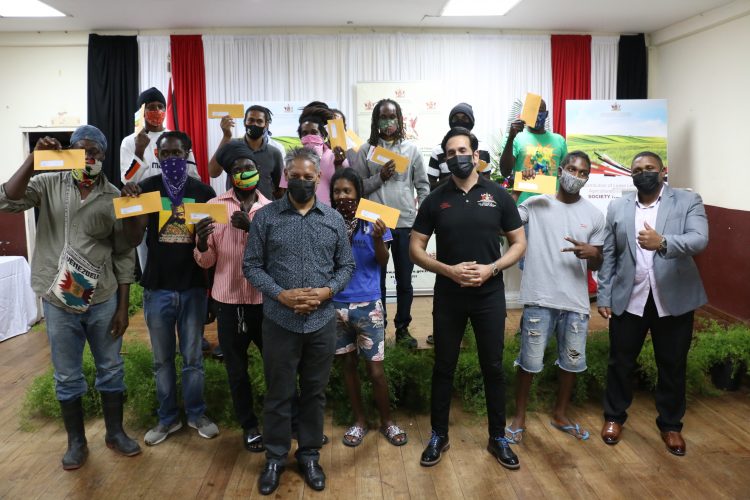 Minister of Agriculture, Land and Fisheries, Senator the Honourable Clarence Rambharat, is flanked by the Attorney General, Minister of Legal Affairs and Member of Parliament for San Fernando West, the Honourable Faris Al Rawi and lease letter recipients at the Society Hall Lodge in Marabella on Wednesday 31st March, 2021, following a brief distribution ceremony.