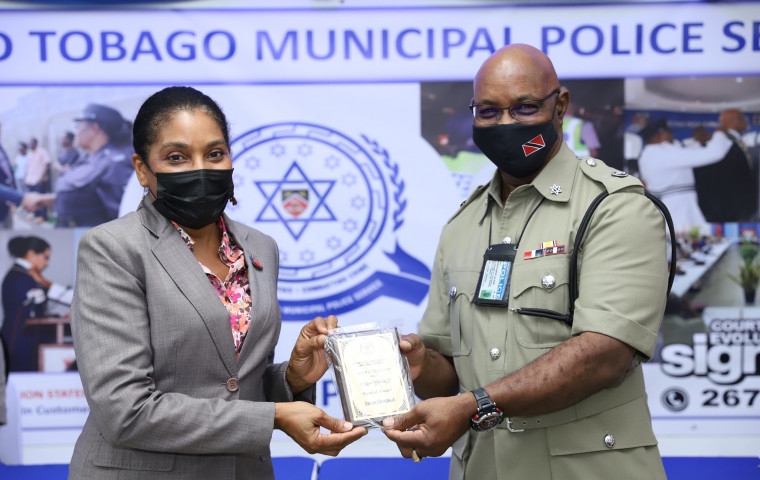 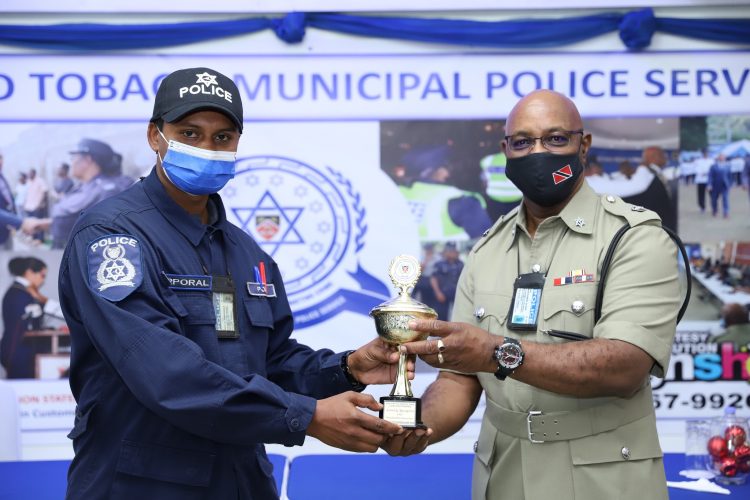 Photo caption: Superintendent of the Praedial Larceny Squad, Murchisson Alexis (right), presents an award to Corporal Davindra Samsundar (left) at an Award & Recognition Ceremony hosted by the PLS at the Municipal Police Academy in Marabella on Friday 10th December, 2021. Corporal Samsundar took home the lion’s share of awards last Friday (10/12/2021) as he distinguished himself amongst four (4) of the ceremony’s six (6) categories – Special Achievement, Dedication / Devotion to Duty, Merit and Outstanding Performance.

Fixing our country is not a job for the police or any single entity but must be accomplished by all groups in our society; either we save our country together or we all perish striving to succeed individually. Such were among the heartfelt sentiments expressed by the Superintendent of the Praedial Larceny Squad (PLS), Mr. Murchisson Alexis, as he addressed both recipients and attendees at an Award and Recognition Ceremony hosted by the PLS on Friday 10th December, 2021.

In highlighting the benefits of strategic collaboration in the fight against crime, Superintendent Alexis lauded the strategic wisdom of the PLS in uniting its efforts with that of the Municipal Police, the Transit Police, the Immigration Detention Centre, Forest Rangers, the Estate Management and Business Development Company Limited (EMBD) as well as the Trinidad and Tobago Police Service – all of whom bore the brunt of collective responsibility. He also emphasized the African adage that it takes a village to raise a child” and said that in going forward, it was incumbent on us all to “re-educate ourselves and train the young people to return to the morality of our elders,” inclusive of which he said, must entail the “good graces of yesteryear.”

Superintendent Alexis encouraged all PLS Officers – despite their unique challenges – to remain diligent and focussed in their undertakings and lauded, in particular, those award and recognition recipients whom he referred to as patriots as they would have braved the many pessimistic attacks of those detractors who sought to impede the tremendous work of the PLS, over the years.

In her remarks at the ceremony, Permanent Secretary (Ag.) Shurland reflected on the characteristics of an “ideal” worker, which she noted, would auger well for the PLS if Officers were to measure their own conduct by those standards. Among these exemplary traits she identified were: professionalism, accountability, effective communication, respectful interaction and the art of diplomacy. She added too that she was utilising her very best efforts, to ensure that the PLS was adequately resourced so as to better enable it to effectively reduce the incidence of praedial larceny in the country.

Just over twenty (20) Officers of the PLS received awards in six (6) respective categories – namely, Appearance & Turnout; Punctuality & Regularity; Special Achievement; Dedication / Devotion to Duty; Merit and; Outstanding Performance – with some eight civilians being recognised for their distinguished and continued support to the work and success of the PLS.