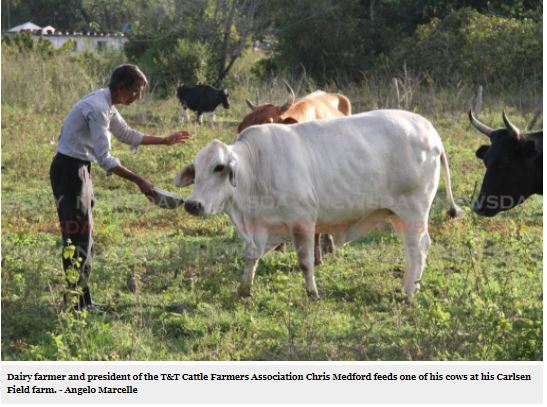 President of the Cattle Farmers Association believes the ruminant or livestock industry can be saved despite the challenges and pressures it currently faces.

Chris Medford who has been a cattle farmer for over 20 years and president of the association since 2004 said TT has enough resources to ensure a thriving livestock sector and by extension the rest of agriculture sector.

Sunday Newsday visited his farm in Carlsen Field last week to discuss matters plaguing the industry – the latest being an increase in feed prices.

He admitted that the industry has been on a decline since the early 2000s and attributed most of it to mismanagement and corruption at the Ministry of Agriculture and raw deals with Nestle – the Switzerland-based company which purchases milk from the dairy farmers.

Medford said, “The industry was good up until 2001 or 2002 but it has declined considerably and the recent increases in feed prices was another nail the coffin for cattle farming in this country.”

He explained that the cattle industry comprised both dairy cattle and beef cattle. In TT, cattle is hardly reared for beef but rather for its milk, he said.

“The butchers get their cows from the dairy farmers. The beef cattle are a spin-off from dairy farming and so, if dairy dies then there is no local beef industry. The entire industry will fail. There are about 150 members in the association with only 75 of those being active cattle farmers. There was once 1,500 members.” 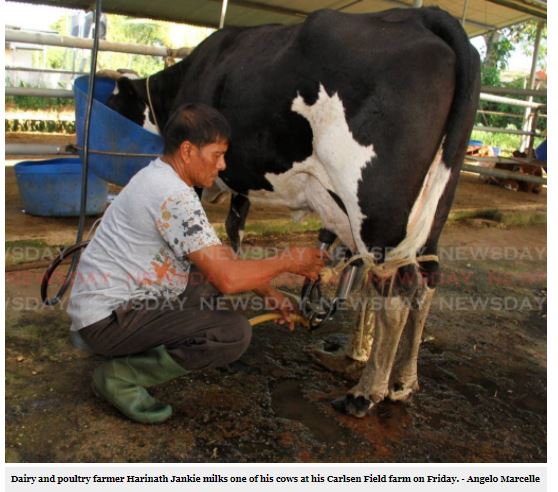 Dairy farmers from Turure, Wallerfield, Carlsen Field, and Waterloo are on the brink of selling out and giving up, he said, with other dairy farms like the one in Esmeralda, which fell into hard times and closed as fast as it was established.

The farmers, Medford said, have been place in a greater predicament to produce milk because the increase in feed prices.

“We are in a desperate situation. In order to produce quality and quantity milk, besides having good genetics, there must also be good nutrition. Unfortunately, we do not have any nutritional grasses.

“The agriculture ministry has always been analysing and testing but have not come up with any suitable grass for milk production. Lactating cows need good quality grass and good quality feed concentrates.”

The increase in feed prices have been attributed to global shipping costs, increased demand for grains such as corn and soybeans, China’s role in the market, unfavourable weather conditions in South America and labour strikes in Argentina. 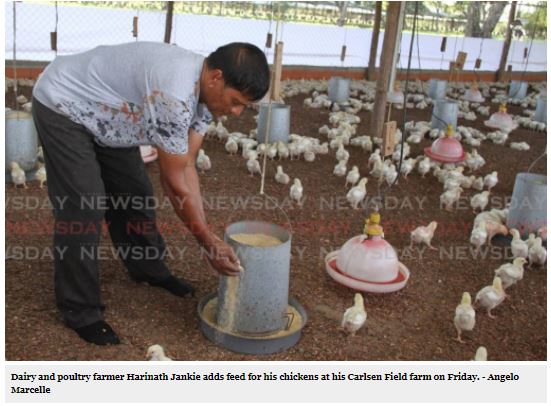 Medford called for the Ministry of Agriculture, Land and Fisheries to utilise the abandoned lands in Mon Jaloux, Madras, which was once put aside for the purposes of developing feed and grass banks.

“Why should we be in this position where we depend on imported grains to make livestock feed? There was a grass bank in Madras which was a good idea put forward in the (Patrick) Manning administration, but it was closed down and the facility is left abandoned. Nobody (governments) continues what was started, when elected they do things their own way, no matter how good or effective it is.

“All these things have contributed to the point where we are now dependent on imported dairy rations. If it (local grass bank) is revived it can save the local dairy sector. They could plant corn or grass suited for dairy production and we will buy it. We cannot do it alone because praedial larceny continues to plague us.

“We must find alternative sources of feed. There should be vibrant grass in order to adequately supply the sheep farmers, the goat farmers, bison farmers and the cattle farmers.” 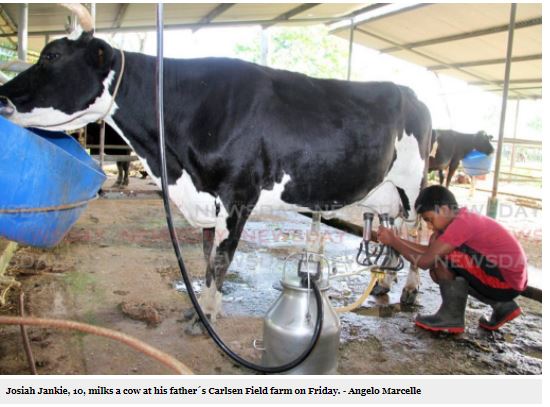 Medford cited himself as an example to further drive the point that the livestock industry is on a decline, after his herd of 300 cows now stands at 27, and his staff has been reduced to one person following layoffs over the years.

Another of the farmers’ concern has been government’s subsidy which he claimed has had a significant negative impact on dairy farmers, including a decrease in the yearly production levels.

“We continue to get a pittance of $3.85 (a litre) for our milk which is below the world required price. Labour costs are high, feed prices are high and equipment costs are high.

“In the years before like in 2001 we produced and sold commercially 13 million litres of milk and from then on there has been a consistent decline over the years. This year we a projected to produce 1 million litres.”

Medford hopes that government would assist in finding an alternative where farmers can sell their milk and move away from what he claimed was a monopoly held by Nestle for decades.

He noted that the cattle is also important for religious purposes for Hindus and Muslims which add to their income.

Another farmer in Carlsen Field, Harrinath Jankie said because of the decline in the industry he has to find alternatives to subsidise his income.

“I had to take it upon myself to diversify so I used the milk to create dahee and ghee. This has been more profitable than selling to Nestle. I also went into poultry production some years ago.

“We are anticipating a raise from our feed supplier, Nutrimix and based on that our prices will have to adjusted. In fact, soon we will have to raise the prices on our dahee and ghee.”

Jankie has been a farmer since he was 16 years old and over the decades, noted that the lack of incentives is a deterrent for young people to get involved in farming. 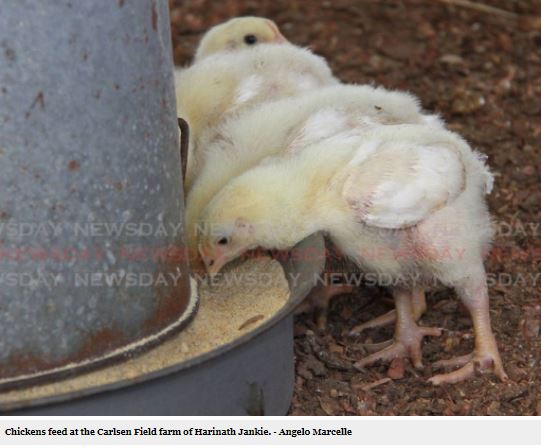 “I had 50 cows now I am down to 23. A major issue is also labour so we had to invest in milking machines which were costly. The first-generation farmers survived but things are hard, and they do not want their children to get involved. They prefer to sacrifice to ensure careers can be built in other sectors.

“The dairy industry could supply but we have to get an alternative, it cannot be that we supply Nestle alone.”

Agricultural consultant at Tropical Agriculture Consultancy Services Riyadh Mohammed said there has not been significant adjustments or development potential in the livestock industry over the years when the country possessed a greater financial backing.

He said it was almost a doom and gloom for the industry and without urgent intervention by the Ministry of Agriculture to get forage farms up and running, more farmers will opt to sell out their herds.

“We are in trouble. The ruminant industry can be saved by opening forage farms. This will have a mixture of grass and legumes, so the animals will have a combination of proteins, carbohydrates and fibres which will be nutritional. This would minimise on the dependent on imported feed.”

Mohammed also recommended the re-opening of the Mon Jaloux to prepare forage for the entire year.

“The land is already there, most of the equipment is there and there are trained staff in the ministry, so it is just a matter of getting the initiative back up. So, this will heavily subsidise the cost of feed and allow farmers to continue producing meat and milk.”

The ruminant industry, Mohammed said, does not have the necessary systems in place and predicted more farmers will sell out their farms.

He added that there was major disconnect between the educating bodies, the public sector and the private sector and recommended that there be focusing on producing feed locally and utilising non-conventional feed resources.

Minister in Ministry of Agriculture Avinash Singh said contrary to the farmers’ complaints the Mon Jaloux farm is operational and services livestock farmers on regular basis with grass.

He added that while the ministry is plagued with financial challenges, it still continues to subsidise farmers throughout the country.

“The Mon Jaloux farm that produces forage for farmers which are highly subsidised, if not free in some cases. With the reduction in revenues and allocations there may be some constraints.

“The Mon Jaloux facility is working and there for the farmers. To say it is not operational would be a lie. A farmer will never tell what incentives they received or the value. They don’t ever let the population know when they collect an incentive.”

Singh said there was not a decline in the sector but rather livestock farmers were showing an interest to start or expand their farms.

“The sector is not in trouble, but we must consider climate change and the global economic factors that impacts every country. We understand the cries of the farmers and have been tying to provide for those types of unplanned events.”

Nestle said previously it has over the last three years invested almost $10.5 million in the dairy industry which included a Dairy Development Bank in 2008 which assesses milk production and quality and also caters for forage and feeding, animal health, fertility and farmers’ entrepreneurial skills, veterinary services, artificial insemination and pregnancy diagnosis.

Additionally, the company introduced a corn silage initiative between 2018-2019 investing in equipment, training and technical support from veterinary and agricultural specialists.

In response to queries from Sunday Newsday about the viability of the industry, the ministry said the government provides subsidised institutional support service.

“Various activities have been undertaken to support the dairy subsector such as private partnerships, memorandum of understanding signed with Nestle TT Ltd that guarantees a minimum price for milk produced by farmer and transport.

In addition to the $1.50 per litre subsidy, farmers can claim up to $6,000 per hectare to establish pastures or fodder banks with approved or improved grasses, cereals and legumes; up to $30,000 on pre-approved animal housing, infrastructure and waste disposal; up to $50,000 on an approved milking system and or a bulk tank cooler, artificial insemination and clinical veterinary support, according to the ministry.