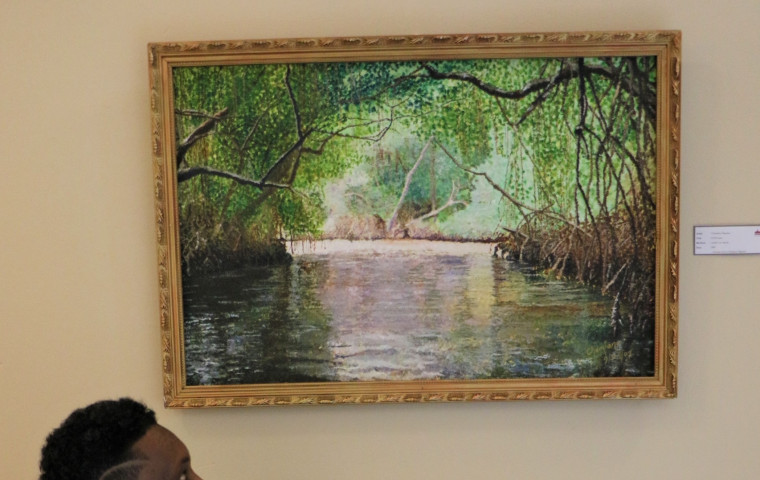 April 9th, 2021:- Completed some fourteen (14) years ago by a Ministry of Agriculture, Land and Fisheries employee – Ms. Chemiene Baptiste – a 36 inch x 24 inch acrylic (on canvas) painting depicting a scene from the ever popular Caroni Bird Sanctuary, earned its place as one of the main attractions of an environmental art exhibit, currently featured at the Rotunda Gallery of the Red House. The piece titled, ‘SANCtuary’, which was done back in 2007 as a part a tertiary-based Visual Art Certificate Programme, quickly became a forerunner amongst art enthusiasts who attended the ‘See the Beauty Around Us: Caring for our Environment’ Exhibition, which premiered at the nation’s seat of governance, late last month (March 2021).

Ms. Baptiste, an Illustrator (and graphic artist) attached to the Extension Training and Information Services (ETIS) Division, said she had learned about the Exhibition from one of her colleagues, Agricultural Officer I, Ms. Rebecca Roberts-Bain, who encouraged her to submit her work which evidently made its way amongst the crème de la crème. She explained that the 1886 technique she employed was that of pointillism which involved painting in small, distinct dots of colour, applied in patterns to form an image. Such an intricate task she said was one of the main reasons why the piece took several hours per day for close to three (3) months to complete and as per dimension, remained the most time-consuming of all her art pieces to date.

According to Ms. Baptiste, another peculiar feature about ‘SANCtuary’ is that the artwork was also her last named piece. The reason she advanced for not placing a title to her artistic expressions since then was one based purely out of respect for the ‘beauty’ which lied in the eyes of the beholder. She said: “I believe that everyone comes away with something when they look at a piece of art. I am of the opinion that when a piece is named, observers tend to try to find some representation of the name attributed to the work instead of taking away their own experience of how the piece made them feel intuitively.”

This graduate from the University of the West Indies (B.A. Visual Arts) who credits herself as an artist since her early childhood, said she felt blessed to be able to have a job that was not only her passion but one which enabled her to express the world in the manner she perceived it to be. By her own admission, Ms. Baptiste continues to be multi-dimensional in her approach, incorporating several elements from paintings and computer-generated designs to wire bending and installation pieces. “However an artistic piece chooses to manifest itself in this realm, I am able to inhibit it; not as the creator but simply, as its conduit,” she added.

Persons interested in viewing Ms. Baptiste’s artwork as well as others featured in the Exhibit at the Rotunda Gallery of the Red House are asked to contact 701-6133, in order to schedule a visit between Monday to Thursday, between the hours of 9:00 a.m. – 3:00 p.m. The Exhibition ends on Thursday 22nd April, 2021.

The Management and Staff of the Ministry of Agriculture, Land and Fisheries, take this opportunity to congratulate Ms. Baptiste on this very noteworthy achievement. 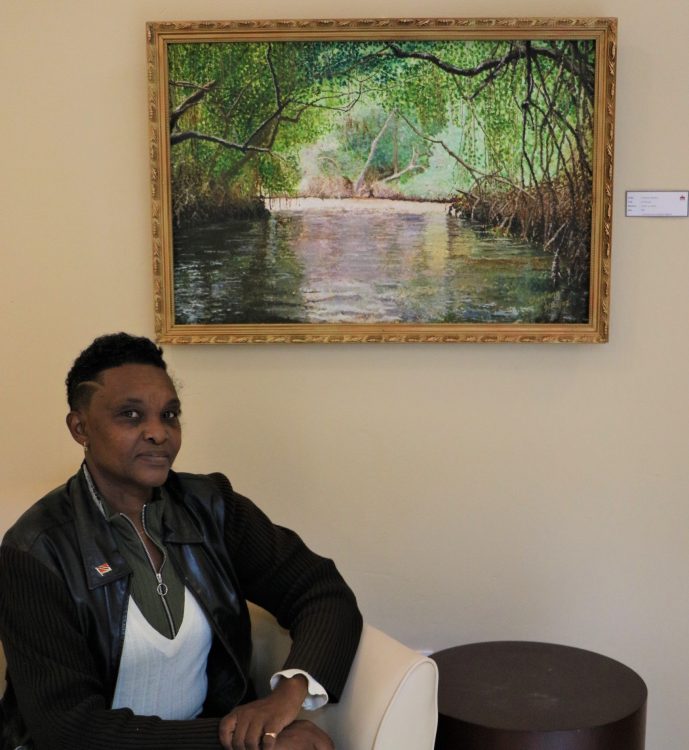 Artist and Illustrator attached to the Ministry of Agriculture, Land and Fisheries, Ms. Chemiene Baptiste, strikes a pose at the Red House’s Rotunda Gallery in Port of Spain. In the background is an image of her acrylic painting which is currently being featured at the ‘See the Beauty Around Us: Caring for our Environment’ Exhibition at the said location. The piece, titled ‘SANCtuary’, is over a decade old and depicts a scene from the Caroni Bird Sanctuary. It took her approximately three (3) months to complete and incorporated the 1886 technique of pointillism which involved painting in small, distinct dots of colour, applied in patterns to form an image.