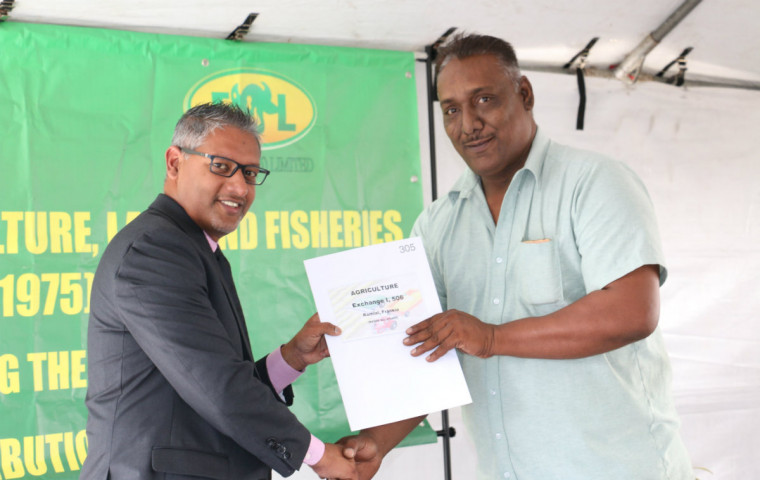 Persons attempting to use agricultural parcels for commercial purposes “may be called upon” by the Commissioner of Valuations, “to pay multi-million dollar premiums” to the taxpayers of Trinidad and Tobago. This was the caution issued to the public by the Minister of Agriculture, Land and Fisheries, Senator the Honourable Clarence Rambharat, at a Lease Distribution Ceremony held for VSEP workers of Caroni (1975) Limited on Friday 26th January, 2018. His statements served as “a warning” to those whom he identified as “dabbling in the sale of agricultural land”. The Ceremony which took place on the compound of the Ministry’s corporate headquarters in Chaguanas, witnessed the disbursement of some four hundred and twenty-four (424) leases; 226 of which were residential (inclusive of variations giving rise to the removal of restrictive clauses) with the remaining 198 leases for two (2)-acre agricultural plots.

Minister Rambharat during his Feature Address emphasized that he has always taken a personal interest “in ensuring that what is to be done on [agricultural] land is the only thing done on the land”, said that both the Commissioner of Valuations and the Commissioner of State Lands, have become increasingly vigilant and intolerant of land misuses since they “have a responsibility to the taxpayers and citizens of this country to stand in defence of lands which have been freely distributed for the purpose of growing food on them.” He added: “Land allocated and leased for agriculture, must remain in agriculture unless the Government determines as a matter of public policy that the use should be changed for a particular public purpose.”

Also bringing greetings at the Ceremony was the Chairman of Caroni (1975) Limited, Mr. Jerry Hospedales, who commended Minister Rambharat “for his deep interest” in the lease distribution process and lauded his efforts at delivering some 4,314 leases since his appointment as Minister of Agriculture in September 2015. In acknowledging that the task of preparing, executing and registering 17,852 leases to approximately 9,000 beneficiaries, continued to be both “a challenging and daunting exercise”, Mr. Hospedales admitted to making “great strides” along with the Estate Management and Business Development Company (EMBD), towards the fulfilment of Caroni (1975) Limited’s commitment to the delivery of a total of 8,855 residential service lots and 8,997 two (2)-acre sized agricultural plots to the Company’s respective beneficiaries.