Agriculture Minister to National 4H Council… “Let’s meet and chart a way ahead!” 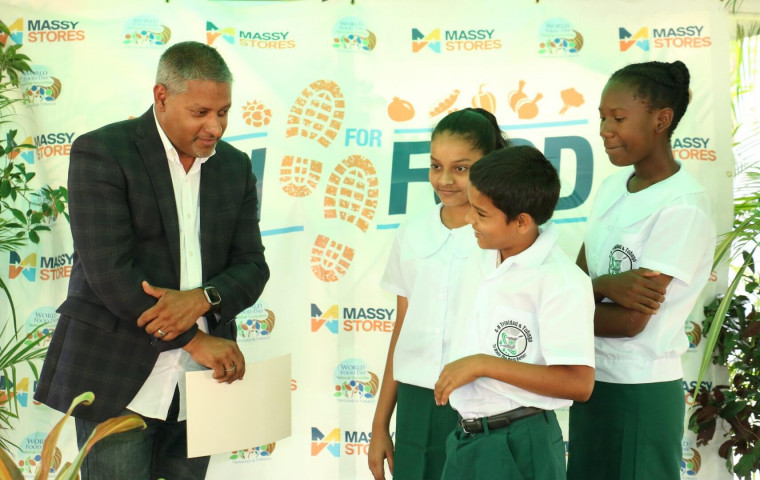 In the context of the excellent work already being done in schools, and the World Food Day theme of “Our actions are our future”, Senator the Honourable Clarence Rambharat, Minister of Agriculture, Land and Fisheries, has said that the National 4H Council of Trinidad and Tobago will be encouraged to “lift its national profile” further and “define its role as the voice of youth in national discussions on food”, as the future success of some 1,200 new 4-H inductees, rested squarely upon its shoulders. Such advice came on Wednesday 3rd April, 2019, during the Minister’s Feature Address at a Tree Planting Ceremony at the Royal Botanic Gardens in Port of Spain. The event, which was hosted by the World Food Day National Committee of Trinidad and Tobago (WFDNCTT), was attended by the: Parliamentary Secretary (MALF), Senator Avinash Singh; Permanent Secretary (MALF), Ms. Lydia Jacobs and Acting Deputy Permanent Secretaries (MALF) – Ms. Ramdai Sookdeo and Ms. Coomarie Goolabsingh; Acting Chief Technical Officer (MALF), Dr. Simone Titus; WFDNCTT Chairman, Ms. Wilhelmina Kissoonsingh; Director, Human Resources (Massy Stores), Ms. Gwendoline McLaren and the National Operations Officer of the Food and Agriculture Organisation of the United Nations (FAO), Ms. Lisa Martinez.

Minister Rambharat, who expressed an intention to meet with the Board of National 4H Council, said that such engagement will better enable him to understand what the entity needs to do for a higher national profile and more so, allow him to convey what he expects of the entity, going forward. He said too that he has considered what else the WFDNCTT can do to increase its scope.

In the context of taking action for the future, the Minister also alluded to a recent meeting at the University of the West Indies (UWI) and the increased use of technology in agriculture. In so doing, he identified with the new and emerging technologies involved in the development of improved cocoa varieties, capable of being cultivated on a commercial scale and possessing characteristics, far different from those many have grown accustomed to. The Minister said: “It is important that we use technology in order to develop the next set of varieties in the cocoa industry, not just for Trinidad and Tobago, but the world and we have an opportunity now – with one of the world’s largest investors in the chocolate business -to develop with UWI, a project on the East/West corridor, that will focus on the use of high-level technology and in particular, those related to genetic varieties in order to develop the future of cocoa.”

In emphasizing the importance of education, Minister Rambharat noted that he had a responsibility, like all adults, to keep learning and interacting with the country’s young people, so as to better shape the minds of the nation’s youth; a feat he has been working assiduously towards, having visited some 108 schools to date, throughout the country. He added: “The defining moment in what we do is the opportunity to continuously educate ourselves and to provide vital information to the public because there is clearly a need for public education.”

Preceding today’s Tree Planting Ceremony, was a ‘Plant Torch Activity’, which, like the symbolism behind the Olympic Torch, involved the ‘passing’ of a local plant – the Sugar Apple – amongst eight (8) schools across Trinidad, where it was nurtured by each of the schools’ 4H Clubs, during the course of one (1) week.

The activity will be succeeded by the ever popular ‘Run for Food’ – a 5K Walk/Run activity carded for Saturday 6th April, 2019 at the Queen’s Park Savannah (QPS) in Port of Spain. A product of a Massy Stores and WFDNCTT collaboration, this latter event is aimed at creating public awareness of the complex issue of food security. Apart from the obvious physical activity (inclusive of an aerobic warm-up and cool down), ‘Run for Food’ also strives to encourage consumers to appreciate the value of locally grown produce as the event will feature an on-site Farmers Market and Mini Exhibition at the QPS from 1:00 p.m. – 6:00 p.m. on 06/04/2019. 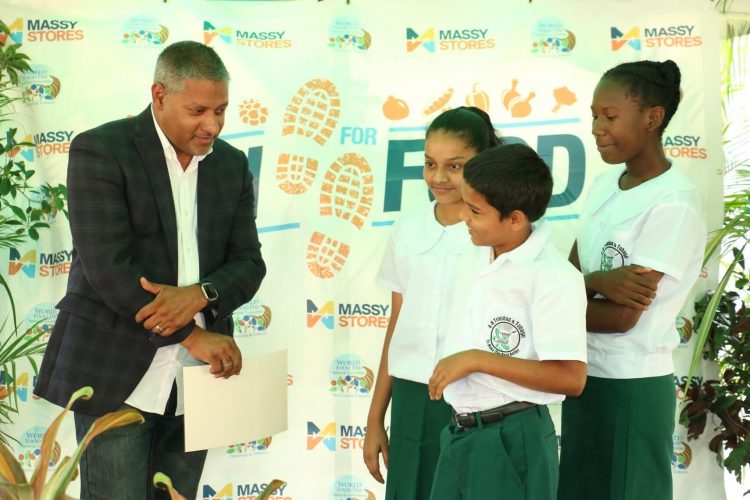 Senator the Honourable Clarence Rambharat, Minister of Agriculture, Land and Fisheries (left), interacts with 4-H students at a Tree Planting Ceremony held at the Royal Botanic Gardens in Port of Spain on Wednesday 3rd April, 2019. The event was hosted by the World Food Day National Committee of Trinidad and Tobago (WFDNCTT). 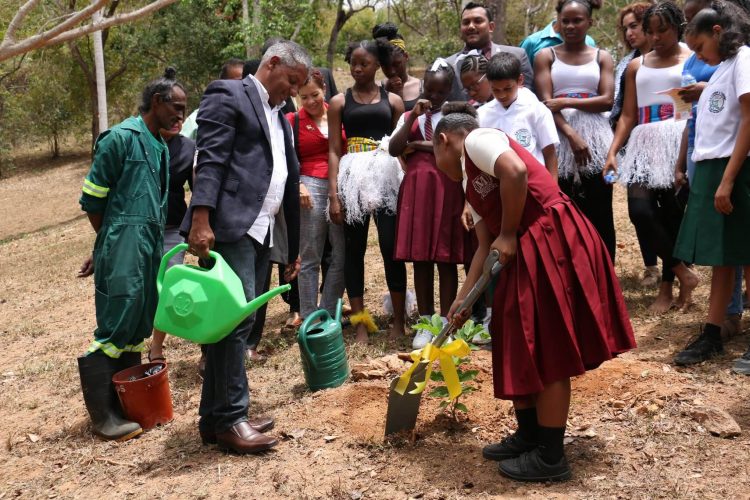 Senator the Honourable Clarence Rambharat, Minister of Agriculture, Land and Fisheries, engages the attention of 4-H students during a Tree Planting Ceremony held at the Royal Botanic Gardens in Port of Spain on Wednesday 3rd April, 2019. The event was hosted by the World Food Day National Committee of Trinidad and Tobago (WFDNCTT).