Agriculture Minister on his request for audit of flood assistance payment to farmers: “Taxpayer assurances needed!” 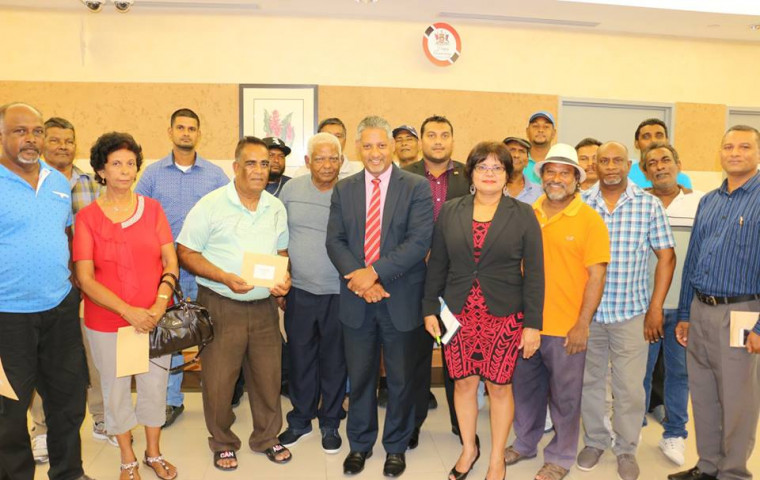 n the interest of clarity and transparency, Senator the Honourable Clarence Rambharat, Minister of Agriculture, Land and Fisheries, has formally written to the Permanent Secretary in the Ministry of Finance (MOF), requesting that the Central Audit Committee (MOF), conduct an audit into all flood assistance paid out to farmers in excess of $75,000.

Additionally, the Minister has also requested a sample audit of those payments below $75,000. This revelation was made by Minister Rambharat last Tuesday (04/09/2018) at the corporate headquarters of the Ministry of Agriculture, Land and Fisheries (MALF) in Chaguanas, during his brief before distributing flood assistance cheques to farmers approved by the Ministry. These payments were associated with Tropical Storm Bret and floods which occurred around Divali in 2017. The event was attended by the Parliamentary Secretary (MALF), Senator Avinash Singh; Permanent Secretary (MALF), Ms. Lydia Jacobs and Acting Deputy Permanent Secretary (MALF), Ms. Ramdai Sookdeo.

Minister Rambharat noted that at the time of the floods, MALF “had absolutely no money to deal with these claims” and it was only after the mid-year review that the Government asked the Parliament to take “the unusual and unprecedented decision” to make a special allocation for a few categories, which included flood assistance and the settlement of debts owed to rice farmers. It is for this reason he said that he needed to assure taxpayers – as well as his own curiosity – that there was equity within the system. He said: “While I am in no way involved in the financial processing of flood relief applications, I have looked at the figures of these disbursements and have noticed that they range from a few hundred dollars to one over $200,000. This disparity, I believe, has to do with the varying extent of damages suffered and the types of crops but I am curious and will need some external assurance that the system is operating transparently so that we will know exactly why some people are rejected and why some people are given the opportunity and the quantum of it. I want some assurance because I want to be able to report to the taxpayers of the country.”

On the issues of land tenure and farmer registration, the Minister revealed the progress has been slow and that he would be going to Cabinet with a request for competent staff within the Land Management Division (MALF) which he was certain, will “accelerate the work” of the Ministry. “For this year alone, Cabinet has dealt with approximately 500 parcels of land, many of which, on average, involve State leases which have expired about thirty (30) years ago. Land tenure has been your number one issue as farmers and I would like my term in office – however long it is – to be marked by my ability to distribute these leases to you,” Minister Rambharat said. He also hinted at the upcoming launch and roll-out of an Agricultural Incentive Programme (announced in the 2017/2018 Budget) in a few weeks, which he was confident, would vastly improve the quality of farmers’ output to the nation.