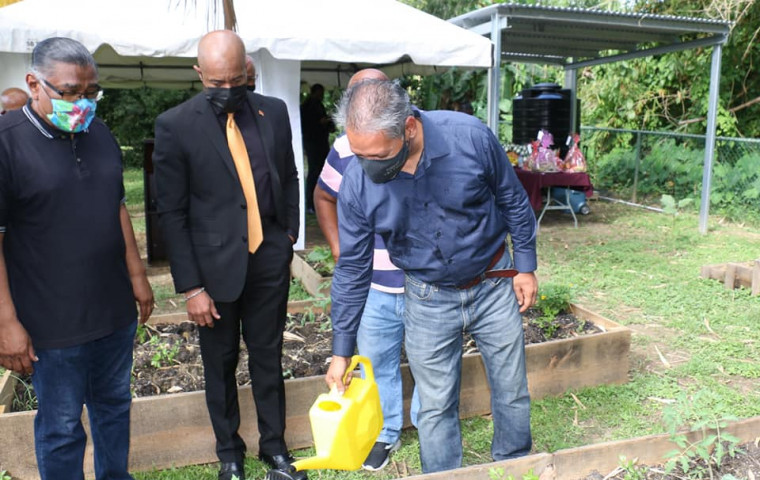 Dependent on Ownership, Commitment and Responsibility

November, 13, 2020:- In delivering the feature address at the opening of the Ganknaski Avenue and Tumpuna Court Community Food Park in Arima this afternoon, Minister of Agriculture, Land and Fisheries, Senator the Honourable Clarence Rambharat said, that while community initiatives are easy to start, the real test comes with the project’s sustainability as there must be some level of ownership, commitment and a sense of responsibility.

Projects such as these will only survive when you have good leadership in a community, he said. To this end, the Minister identified with the residents of Oasis Gardens in Chaguanas, whose work in his opinion, had earned them the title of “number one home gardening community in the country.”

Minister Rambharat added, that the “most important decision one can make was to support its community, as this goes well for the overall success of the economy.” The Agriculture Minister went on to further explain, “when I make that purchasing decision at the shelves and I choose something that is made here, I am supporting jobs, I am supporting farmers, my health and most importantly, I am making a very patriotic decision to support Trinidad and Tobago (T&T).” As such, the emphasis on feeding ourselves ultimately begins with us, he said. There is an unbreakable link between health, longevity and what we consume, and Minister Rambharat urged persons to make more informed decisions when it comes to their eating habits.

According to the T&T Representative for the Inter-American Institute for Co-operation on Agriculture (IICA), Ms. Diana Francis, the project was a testament to “the importance of self-motivation and community collaboration as an effective, developmental resource”. She said, the idea for an agri-community garden was borne entirely by a group of residents, who, in consultation with Sunbeam Foundation (NGO), and the collaborative, technical intervention of IICA, brought the idea to full realization.

Also speaking at the event was Derek Regis, a community member and active home gardener, who said, it is his intention to utilize the space to grow crops that will satisfy all the food groups for a balanced diet. The agriculture crops he proposed, will include: cassava, sweet potato, plantain, bodi, pigeon peas, ochroes, melongene, in addition to a variety of fruits and other vegetables.

Also, in attendance at the formal ceremony, was His Worship the Mayor of Arima, Alderman Cagney Casimire. 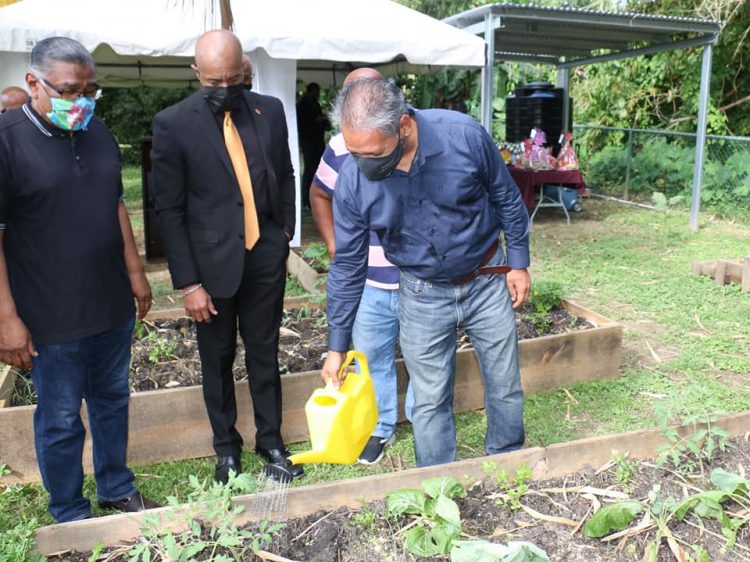 Minister of Agriculture, Land and Fisheries, Senator the Honourable Clarence Rambharat (right), waters a grow box following the opening of the Ganknaski Avenue and Tumpuna Court Community Food Park on Friday 13th November, 2020. Also in the image is His Worship the Mayor of Arima, Alderman Cagney Casimire (left).