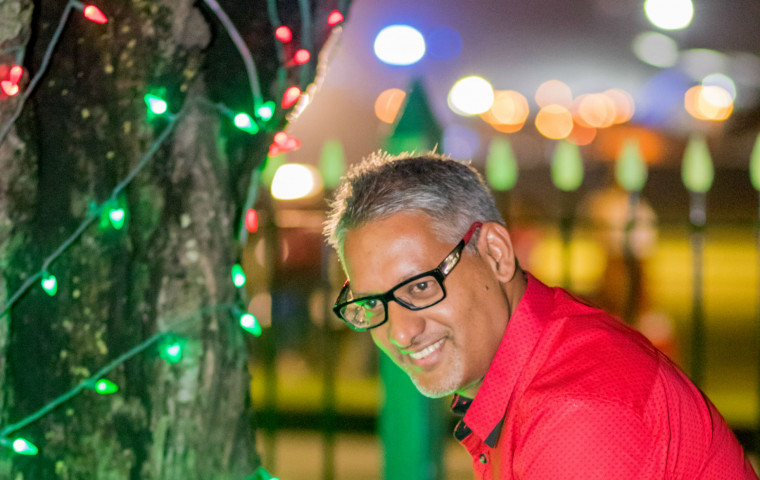 December 07, 2020:- In a symbolic act signalling the start of the Yuletide Season, Senator the Honourable Clarence Rambharat, Minister of Agriculture, Land and Fisheries, turned on the lights at the Royal Botanic Gardens (RBG) in Port of Spain on Thursday 3rd December, 2020.

The ceremonial lighting of the RBG last evening, also marked the official launch of the 2020 ‘Family Nights Under the Lights (FNUTL). However, because of the COVID-19 Pandemic, this year’s instalment will be in the form of a television programme. It will be hosted by Minister Rambharat and his wife, Camille Rambharat, and will relive the many magical moments and special memories that made it a hallmark feature on our local Christmas calendar, attracting thousands of families to the RBG over the years.

Speaking at the ceremony last evening, Minister Rambharat said that since 2015, “FNUTL had brought a new Christmas experience to T&T”, as each year, the event organizers “came to the RBG to herald the season of giving and goodwill to all”. He noted too that 2020 was “a new year” for FNUTL and will witness the event “coming to your homes,” as the television production promises to deliver the best of FNUTL.

The Minister, who lauded the creative genius of his wife for having conceptualized the highly anticipated event said that FNUTL would not have been possible without the support of its corporate partners, namely, BP Trinidad and Tobago; National Lotteries Control Board; Atlantic LNG; Nutrimix Group of Companies and Caribbean Airlines. He added that the Ministry of Agriculture, Land and Fisheries, also provided non-cash support through several Divisions including the: Horticultural Services Division;  Forestry Division; Estate Police, Praedial Larceny Squad and countless other employees across the Ministry.

With the traditional lighting of the Royal Botanical Gardens, there has been a temporary extension to the closing hours at the venue, from 6:00am -10:00pm daily. The extended opening hours commences from today, Friday 4th December, 2020, and shall continue to be in effect until Sunday 10th January, 2021.

The FNUTL 2020 television feature, is scheduled to be broadcast later this month on Christmas Eve, Christmas Day, Boxing Day and New Year’s Eve. The times for the stations’ broadcasts will be subsequently advertised.