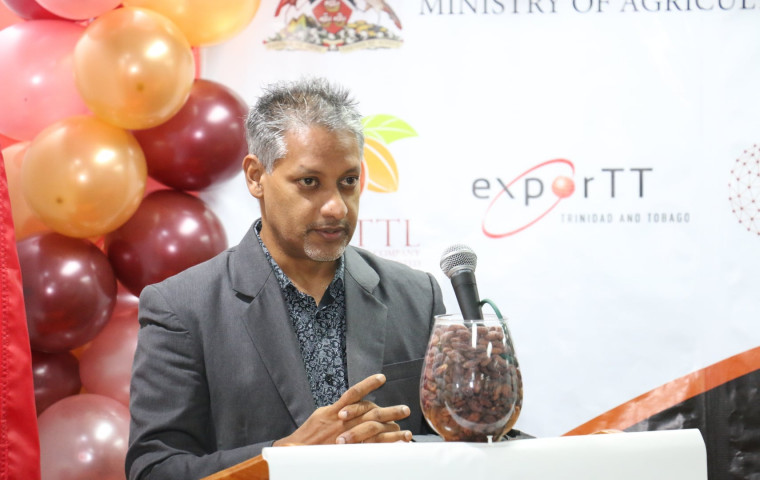 February 26, 2021:- In his address at the second edition of the National Cocoa Awards and Prize Giving Ceremony which took place at the Chaguanas Head Office of the Cocoa Development Company of Trinidad and Tobago Limited (CDCTTL) earlier today, Agriculture Minister, Clarence Rambharat admitted that while financial constraints continued to pose a challenge for State agencies like the CDCTTL in light of competing public sector interests, he was “not worried” about the issue of funding for the company and said he was prepared to make the most of his Ministry’s current allocation and stimulus. The Minister added, that it is very important in the development and commercialization of agriculture that the private sector be given the opportunity and that Government creates the enabling environment.

The overall winner of the prestigious Professor John Spence Challenge Trophy, was the Mother and Son team – Stephanie and Javed Omardeen of Brasso Seco. They emerged victorious from a field of thirty-six (36) entrants and also received $5,000.00 in addition to, tools and equipment from Caribbean Chemicals and Carlsen Chemicals. In accepting the award, Stephanie Omardeen expressed disbelief at being awarded the top prize, saying, “I wasn’t sure if we should submit a sample or not”. She went on to thank all those who encouraged her to enter the competition for the first time.

For this year’s event the CDCTTL introduced a new award which was for Microlot Composite Sample to allow groups of farmers from a community to submit one (1) sample that would represent the flavour of that area. This was won by the Farmers of Four Roads Tamana Cluster (Tamana).

The samples from all five (5) winners (aforementioned) will represent Trinidad and Tobago at the 2021 Edition of the global Cocoa of Excellence Programme to compete for International Cocoa Awards.

Also speaking at the event was the CDCTTL Chairman, Ms. Jacqueline Rawlins, who lamented on the unavailability of planting material which she said had adversely impacted current production levels within the cocoa sector. In addition to that she identified with the sustainability risks of aging cocoa estates and the sector’s deficiencies in the diversification of labour.

First launched in 2018, the National Cocoa Awards is aimed at celebrating the value of our Trinitario cocoa culture and diverse flavours, by attracting and rewarding a broad base of farmer participation. The competition serves as preparation of entrants for our country’s participation in the global Cocoa of Excellence Programme (CoEx) which recognises cocoa beans with exceptional and unique flavour attributes, and also serves as the entry point for cocoa producers to participate in the prestigious International Cocoa Awards. According to the Deputy Chairman of the CDCTTL and Chairman of the Cocoa Awards’ National Organising Committee, Mr. Kamaldeo Maharaj, Trinidad and Tobago – the birthplace of the Trinitario fine/flavour hybrid – has the distinct honour of winning more International Cocoa Awards, than any other country in the world.

The National Cocoa Awards is coordinated by the National Organizing Committee, whose members include representatives from the CDCTTL, the Ministry of Agriculture, Land and Fisheries; Cocoa Research Centre of the University of the West Indies (CRC, UWI) and the National Export Facilitation Organization of Trinidad and Tobago, (ExporTT). 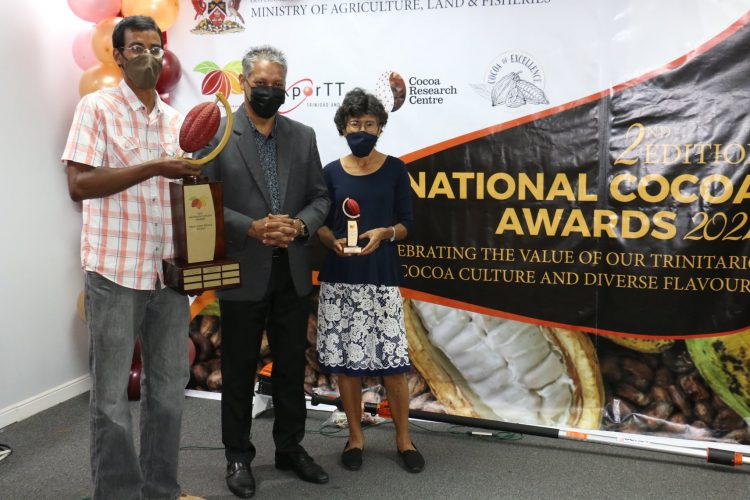 Minister of Agriculture, Land and Fisheries, Senator the Honourable Clarence Rambharat (centre) strikes a pose with this year’s winners of the National Cocoa Awards – Stephanie and Javed Omardeen of Brasso Seco, on Friday 26th February, 2021, following the National Cocoa Awards and Prize Giving Ceremony at the Chaguanas headquarters of the Cocoa Development Company of Trinidad and Tobago Limited (CDCTTL). The mother-son team emerged victorious from a field of some 36 entrants in total.