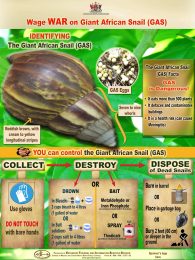 What is the Giant African Snail (GAS)?

The giant African snail (Lissachatina fulica formerly Achatina fulica) is native to East Africa and was introduced into the  Caribbean in the 1980’s. It was first discovered in Diego Martin, Trinidad in October 2008. Since then it has spread to other areas of Trinidad including Aranguez, Golden Grove, Chase Village and San Fernando.
It is a land snail that can grow up to 20 cm (7.9 inches) in length. It is on the list of the world’s 100 most destructive pests. Its presence in a country can  affect trading with other nations.

The shell of the GAS is reddish brown with cream to yellow stripes running in one direction along the length from the pointed part of the shell  (Figure 1). The shell has seven or more whorls. 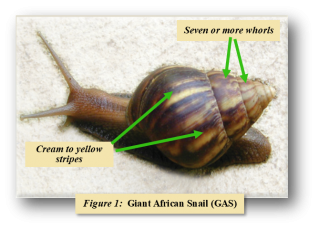 The younger stages of GAS are similar in appearance to the adults; they are just smaller (Figure 3). 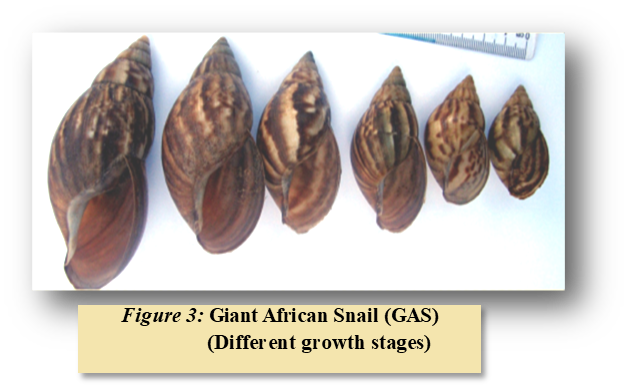 These snails are hermaphrodites (have both male and  female reproductive organs) but need to mate with other snails in order to produce fertile eggs. They reach sexual maturity at 5 months and each snail can produce up to 1200 eggs in its lifetime. If the snail  faces the threat of death, its response would be to  release  eggs.

Where Can GAS be Found?

GAS can be found on and under leaves, along the drains, on walls, in shrub borders, under garbage, in dirt, on vehicles and dark moist areas. The snail leaves a characteristic thick slime trail and clumps of faeces.

What Does it Eat?

Giant African snail is a scavenger and feeds on     decayed vegetation in its natural habitat but it also feeds on plants. The giant African snail feeds on over 500 plant species including vegetables, fruit trees, field crops, forest trees and ornamentals. It has a preference for  papaya and banana.

How is GAS Spread?

Live snails and eggs can be spread in several ways:

The giant African snail can be managed and prevented from spreading to new areas using a number of methods or approaches.  These methods can be cultural or chemical.

Dead snails must then be burnt in a metal barrel (Figure 4).

Metal barrel for burning snails must be 3m (10ft.) or more away from structures.

Barrel should be covered with a metal grill to prevent snails from escaping.

Why should dead snails be collected and burnt?

The Giant African snail is a vector of the Rat Lungworm which can cause the meningitis disease.

Do not handle the snail with your bare hands.

Use plastic gloves or any water proof material such as plastic bag when handling the snail.

This method involves using traps or barriers (bait or spray) in and around the field. 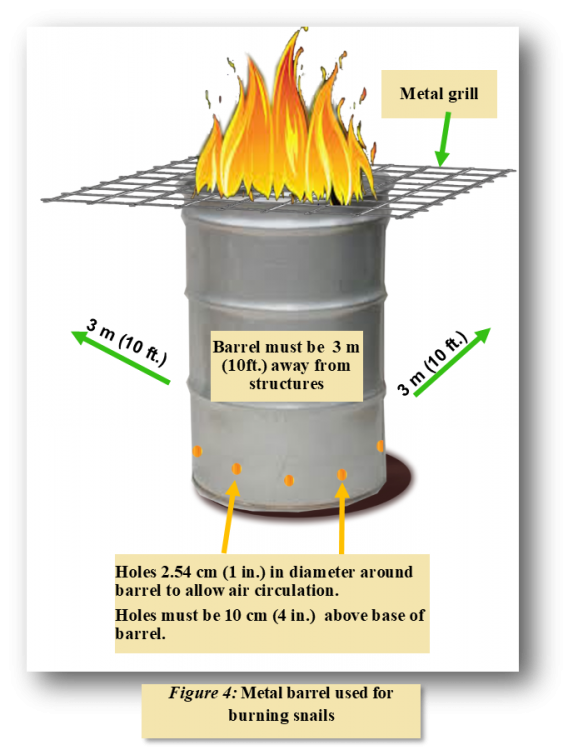 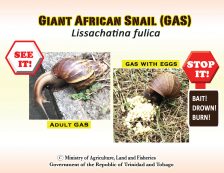 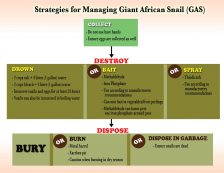 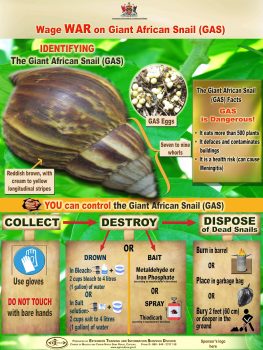